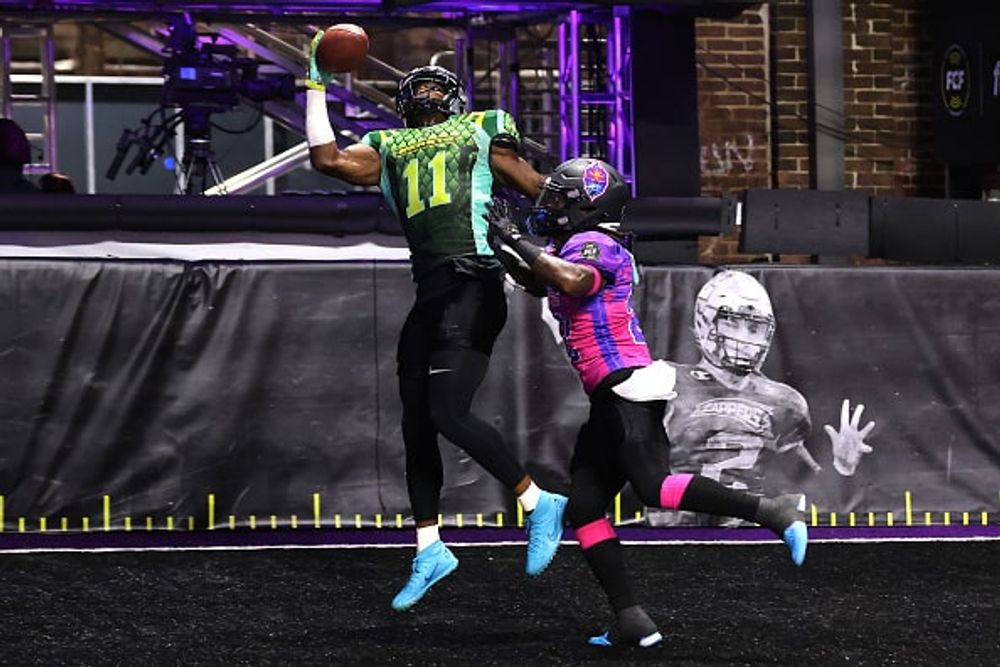 Madden 23 is finally out, and with all the anticipation and hype around the release, we decided here at Fan Controlled Football we would put out some ratings of our own for some of the players that participated in Season v2.0. Oh, and since it is Madden week, we figured we would mock up our own cover for the Fan Controlled Football video game. And since we are FAN CONTROLLED, we figured instead of featuring just a player or coach, we should include some of the fans that make this league incredible. As per usual, we put a vote up to the fans, and they voted for top Zappers fan @notmctunafish! He helped lead his squad to their first ever People’s Championship which was more than deserving of being the feature fan.

We consulted with coaches and staff, and of course polled the fans to put together a list of some of the most talented, most speediest, and hardest hitting players in FCF. These rankings, as seen from the title, are officially unofficial and completely up for debate (but I think we got this spot on). Let the debating begin and as always, let’s get into it.

Is anyone really surprised at who made the list? Kidd and Francois managed the game like pros, and often times would take the game in their own hands and lead their teams to a win. Jordus Smith was an explosive player that the defense needed to account for on every down. Just take a look at this play:

A player like that knows how good he is, and uses it to his advantage. And then of course, Andrew Jamiel. With his shiftiness and crisp route running, he could get open in a phone booth and provided extreme value to his QB’s throughout the season. All of these guys on offense deserve their 99 rating.

Champion was a menace on the line, and even got in on the offensive stat sheet with a TD. Cherry filled up lanes like no other backer in the league, and delivered hits unlike anyone in FCF (more on that in a bit). Foster was in the backfield as much as the offense and gave the OL problems weekly. These guys showed out this season to say the least and earned their 99 ratings.

This is one of the harder traits to evaluate solely on the eye test, so we took the coaches and fans advice on this one. If you watched the People’s Championship, you saw Shun’Cee’s touchdown run, and he got down there in a HURRY. Nobody was even close to him. Harden’s lateral quickness gave defenses enough of a headache and then BOOM, he was down the field. Just look at this!

This man is racing AND BEATING horses. Next level speed. Keyon Thomas was a bit under the radar, but nonetheless, that boy has some wheels. Malik Elion was at the receiving end of the longest touchdown in FCF history, and that doesn’t happen if he’s not clear of his defenders by 5 yards. There was no shortage of speedsters in the FCF, but these guys stood out among the rest (especially if you race a horse).

Scary Cherry didn’t get that nickname for nothing! Cecil Cherry received by far the most amount of submissions for hardest hitter and Coach Liotta gave him some high praise as being the hardest hitter in the league. Need further proof? Check this out:

That hit was the most violent hit I had seen in a while. As a football enthusiast, if that doesn’t get you amped up, I’m not sure what else will. Jim Jones had his fair share of hits and seemed to rock the field. He continually played through the whistle and no matter what, you knew where he was on the field based on his style of play. Dashawn Benton gave QB’s a scare and showed no mercy. Wide receivers didn’t love going 1v1 against him, and whenever a receiver ran through the middle of the field, man watch out for Benton.

There you have it fans. Like I said, these ranking are unofficial, but I think you can agree with me that we sort of nailed this one! I still can’t get over that Cecil Cherry hit…anyways, who do you think we left off? What other rankings would you guys like to see? Let us know in the comments, and as always, Power to the Fans!