Between the Lines With Andrew Jamiel 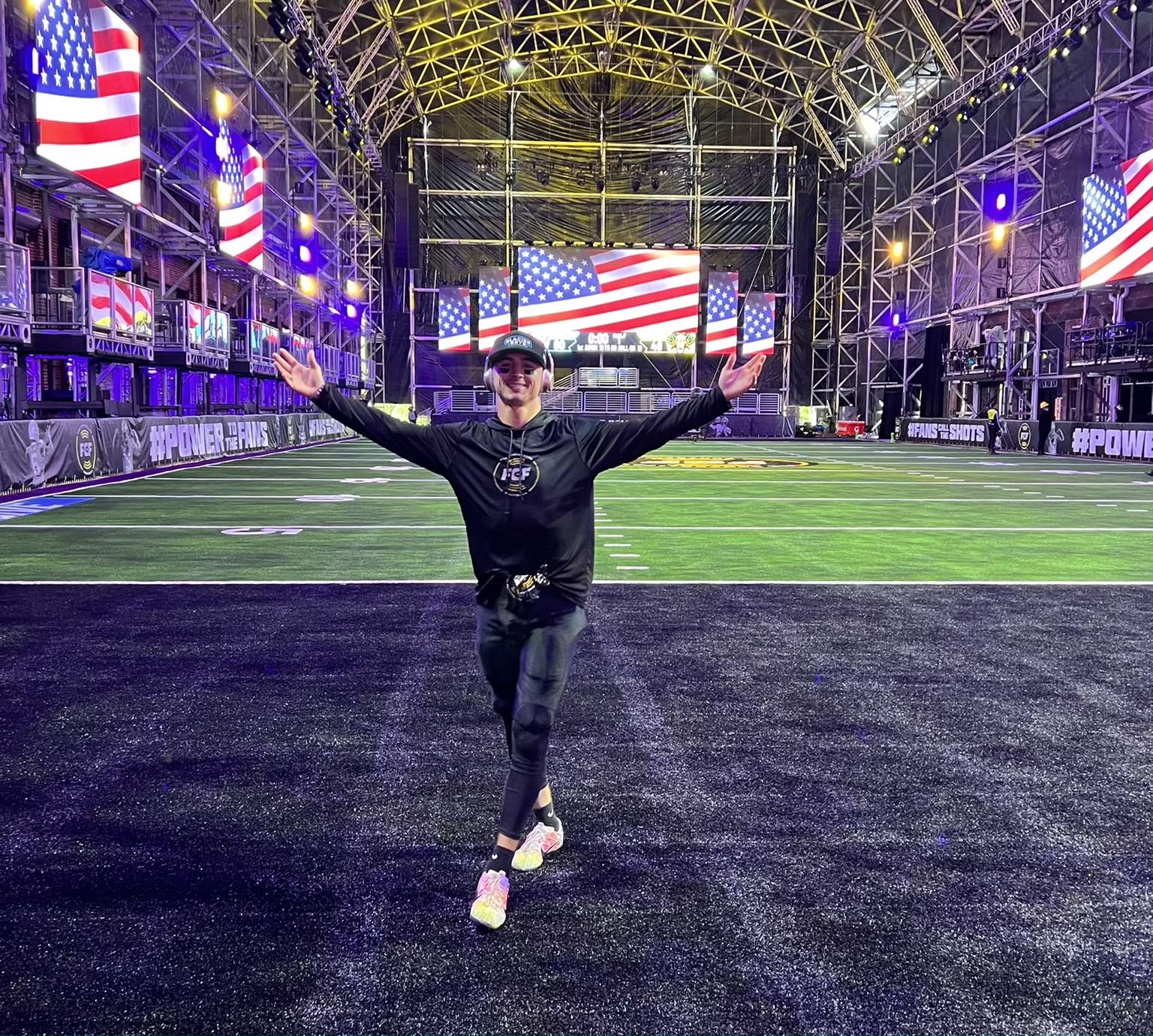 No one was supposed to know who Andrew Jamiel was.

Granted, I did break every receiving record, but for an undersized guy playing at a small Division II college, I knew that the odds were stacked against me. The fact of the matter is that I’m an underdog, but I knew that if I still had the skills and ability to perform the game I love at a high level, then I’m going to work my butt off for every and any opportunity I get.

In March of 2020 I was supposed to have a pro day, but days before my workout, it was cancelled because of Covid. That’s when everything around us was getting cancelled and no one knew what sports, much less life, would look like. One team from the CFL called me and told me they were interested, but with no season to be played, I was left without any opportunity to showcase my skills.

For a solid month I felt sorry for myself. I was working at my family’s restaurant and working out to stay in shape, but I didn’t really know what I was supposed to do.

Later in the spring there was a tryout put on by a few NFL scouts with guys from all over, including ex-NFL players and some D1 and D2 college guys. I thought, worst case it’s a way to get myself out there and see where I stack up against some of these players. I did extremely well and was jelling with one QB in particular, but couldn’t quite tell who it was with all the protocols in place.

Turns out, that quarterback just so happened to be a guy I grew up watching all throughout high school, Deondre Francois. I couldn’t believe it, but we just clicked on the field. We exchanged numbers off the field and established our bond right then and there and now, are brothers for life.

A couple of weeks go by and I don’t hear anything back from the camp. At this point, I was a bit frustrated and was contemplating on what my next move was going to be. But as fate would have it, I get a text from Francois saying his agent hit him up about an opportunity to play for a brand new football league called Fan Controlled Football. There would be an opportunity to get some tape and I was desperate to for any chance to play ball, so I thought, why the hell not?

Before the FCF tryout in Atlanta, I told myself no one was going to be able to guard me. Like I said, I train my butt off and give everything 100%, no matter the circumstance, and this was going to be no different. When I show up, I see my boy Francois but then I take a second and look around. I see famous Youtuber Deestroying who I had just found out about a week earlier. I see ex-NFL and college coaches running drills. I see camera crews and TV personalities. I thought to myself, what did I just stumble on?

I bought into FCF immediately. I’m here to work, make plays and put myself on the map, and these guys were going to help me do just that.

Francois and I team up and deestroy (see what I did there) the tryout and I get offered a contract on the spot. I wanted to take some time to see if this opportunity was for me. I really contemplated whether or not it would be worth it since this league was so different from anything else anyone had seen but was unsure on what the future looked like for me.

I knew it was this or nothing, and after calling up Francois a couple of weeks later, we both decided we would join Fan Controlled Football together.

If I’m being honest, I overlooked FCF and the talent that the coaching staff would be able to put together. After dominating the tryout, I really didn’t know what to expect, but after arriving to the training camp before Season v1.0, I was shocked at the guys that were out here. On both sides of the ball, it was D2 studs like me or D1 players that were here like me just trying to get tape and get their name out. I’m having to go all out every practice because there are some nasty players in this league and I wanted to make sure I was considered to be one of those guys.

I went from not knowing what my football career was going to look like, to having 1M+ viewers watching me, a franchise player, ball out week in and week out from all across the globe all in less than a year. Life is crazy like that sometimes, but that just showed me even more that you have to stay ready for your moment because you never know when that might come.

In Season v1.0 and even Season v2.0, it’s been cool to see the growth I’ve had as a player, and a lot of that has to do with the guys FCF surrounded me with. Not just the athletes, but the coaching staff as well.

Coach Ford, who has multiple Super Bowl rings and was the receivers coach for a bit during Season v1.0, broke down the game for me like no other coach has. I still use his techniques to this day, and when I look back at my college film, I just think to myself how much better I could have been with simple adjustments that I learned through Ford.

Coach Jenks and Coach Liotta broke down offensive schemes and the mindset players should have on each play. Coming into the FCF, making tape was a priority, but coaching was definitely something I didn’t expect to have such an impact on my game, especially from a startup league like this.

And not only did they recruit some free agent dogs like Galloway, Toivonen, and others, but these guys really went out and got Johnny Manziel, Flash Gordon, Terrell Owens and other guys who have had a legit impact on the game of football as a whole. Sharing the field with those guys is special, and when you have them vouching for you and saying ‘you deserve a chance’ and ‘you definitely fit into the league’ it just keeps me going and makes me want to work that much harder.

Playing with, and in front of, football legends of mine is something that I never imagined. If you were to walk up to high school me and say ‘one day, you’ll be playing alongside Francois, Terrell Owens and in front of guys like Antonio Brown, Todd Gurley and Marshawn Lynch’, I would have told you you were insane! Meeting guys like that can change the trajectory of your career, and it certainly has for me.

Meeting celebrities is cool and all, but the one thing that really stands out is the platform that FCF has given me. By no means would I call myself a celebrity, but from Deestroying helping me grow my social following to signing autographs for fans, and even helping out at camps during the off-season and getting recognized has been the biggest blessing.

For instance, earlier this summer I had the opportunity to take an official workout for the New England Patriots, my hometown team. The guy that helped me get the workout and vouch for my talent? Glacier Boyz team owner and legendary NFL cornerback Richard Sherman. To have someone like that in your corner and fighting for you to get a shot in one of the biggest sports leagues in the world is something so personable and so cool about what FCF can afford to athletes like myself.

I’ve loved my journey so far and really only have FCF to thank for that. There’s a lot of extracurricular stuff that comes with football that guys can get distracted by, but at the end of the day, I just want to ball out and make plays.

Would I say it’s been worth it? If you can come out here and make a name for yourself, it’s 100% worth it. One way or another, people are finding out about the FCF, and that kind of traction is what is making this league so attractive to guys like me who can come out and showcase their talent.

Can’t wait for what’s next for me. Until then, LFG baby!