A Chat With the Voice of FCF, Greg Mescall 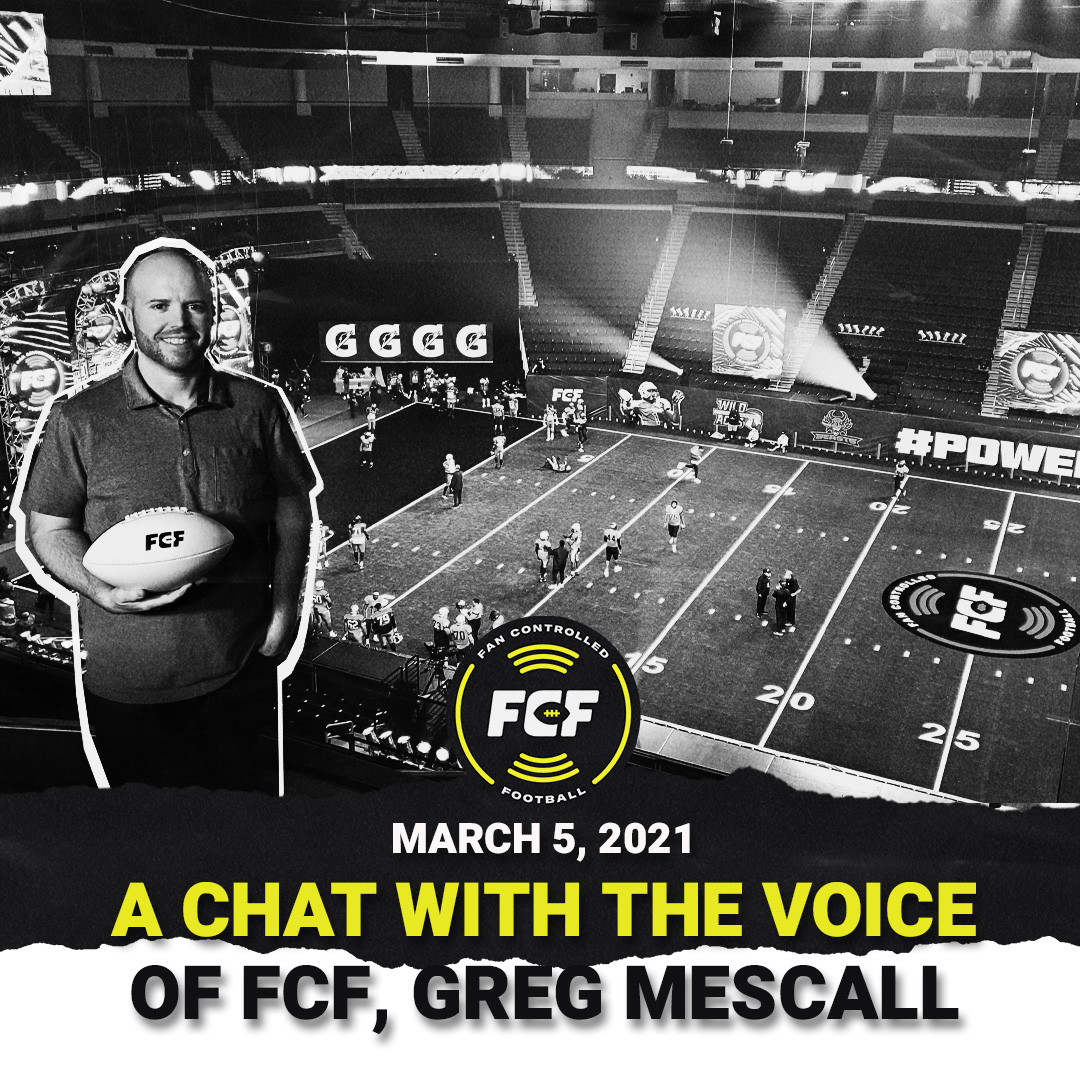 ESPN, NBC, Pac-12, USA Olympics, Westwood One. When you think about sports broadcasting, these are some of the stalwarts.

They’re also where you could have heard the voice of FCF, Greg Mescall.

I recently had the opportunity to talk with the man holding the mic for a lot of the weekly content you can find on our Twitch channel.

With a resume like his, I asked what it was about the league that made him want to part of it, here’s what he said:

“I think it’s exciting to be a part of something brand new. In sports, so much has already kinda been done, a lot of the leagues are established, so to be on the ground floor is something. To help debut, to get all of those firsts, and those history-making moments for something that really has the potential to take-off is very exciting.”

Greg also has experience in improv, training in LA at Upright Citizens Brigade. And if you’ve seen the streams the you know that’s been helpful in the booth.

Getting a couple of weeks into the season – 2 drafts, 2 games – I asked him what he thought about the progression from Week 1 to Week 2:

“I think it was exciting to see how the fans assembled their teams in Week 2, and saw how the guys played in Week 1 drove their draft stock. Logan Marchi, for example, he was the 2nd overall pick (Week 2), but he wasn’t one of the well-known QBs coming in, but the way he played Week 1, and the way he’s been interacting with fans, and that helped him get picked that quickly.

“It was almost like, you know, ‘what have you done for me lately’, right? That last play in Week 1 was Marchi to Kanvontae Turpin, where Logan’s scrambling, and then Turpin gets to the 5 before he’s tackled, but, who are the 1st 2 picks in the next week’s draft? Turpin 1, and Marchi 2.”

It was harder to pinpoint what Greg thought was the most intriguing about what he has seen so far:

“There’s a lot. The fan interaction is unlike anything else. Where you can connect with these guys instantaneously, and build a strong following. Look at Jackson Erdmann, before we even played a single game, everyone was talking about ‘Tag Jerdy’, right?

“He’s one of those guys that’s a success story in this league in that, he didn’t come from a very big school, didn’t play his games on national TV all the time, so he was able to build up a fan-following that help lead to a Franchise Tag over some guys that maybe the fans knew a bit better, so, that interaction is everything.

“The fan-element is the ultimate game-changer for this that separates it from everything else. The calling of the plays – how is that gonna go from week-to-week as the league grows and more fans sign-on? And then you have that immediate feedback in the Twitch chat you don’t really get in other sports broadcasts.

“The ‘fan’ in Fan Controlled Football is the separator, and what makes it all more interesting.”

He hits it on the head with the league’s purpose-driven fan controlled set up, and how they’re following through when I asked him how he thought Week 2 went:

“We had a TD run as time expired, and our first OT, so it’s hard to ask for better finishes. We also had a rule change on clock timing in between games. Just a reminder of how important fan feedback is in the FCF, and I know the league is excited to make things even better next weekend.”

It’s hard to hide the excitement in his voice for what we’re doing at FCF, it’s hard for anyone around it to not show how much they love the game.

It’s a game that is almost simultaneously fan-focused, and all about the players. Without either, we don’t have a sport, but no other league offers this much interaction between the 2. None offers this much control from its spectators.

“We have a lot of guys with interesting journeys and [I’m] looking forward to highlighting those, plus continue to connect with all the amazing fans who make this whole thing go. Without the fans this whole thing quite literally, doesn’t work.”

Couldn’t have said it better, Greg.