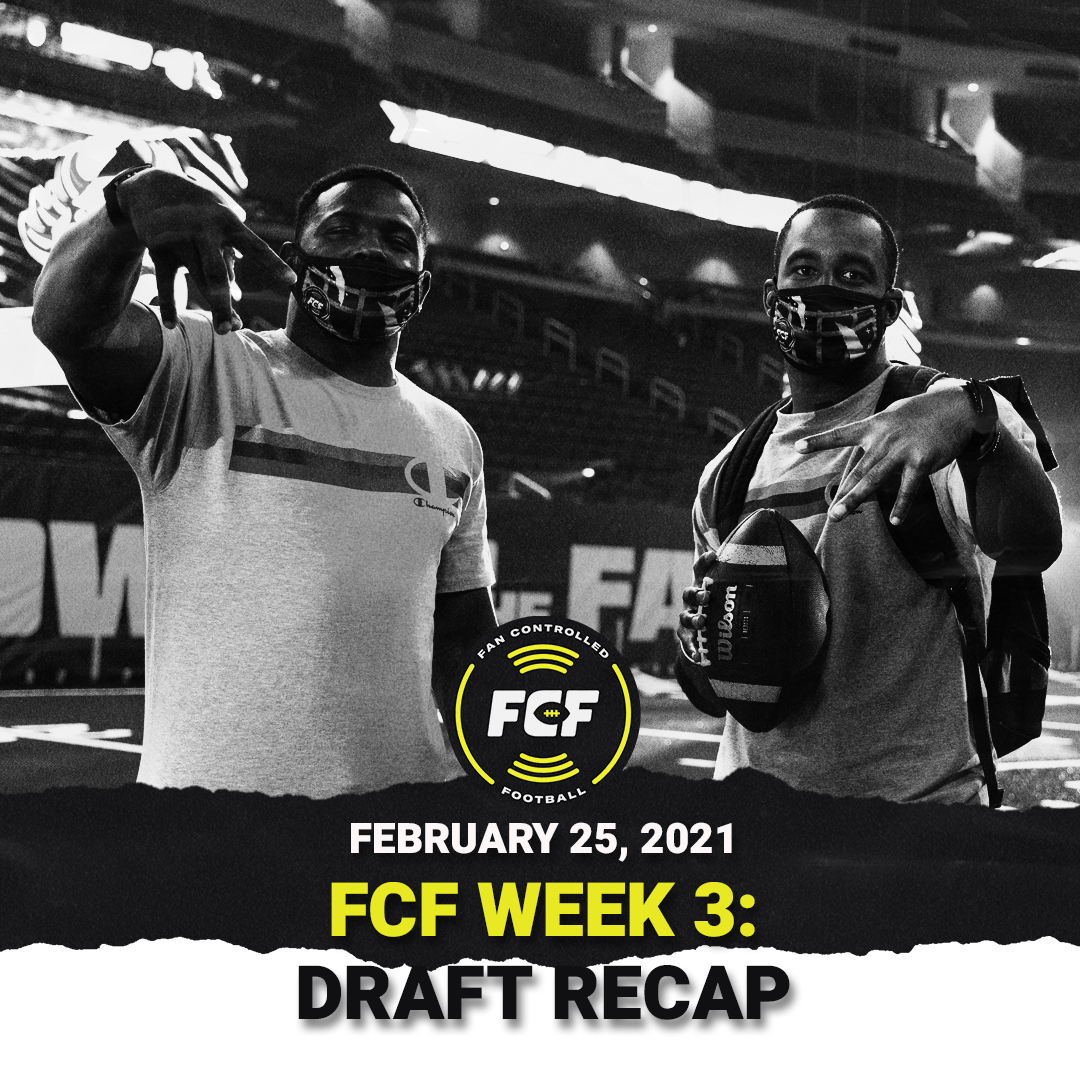 The FCF held their WEEK 3 DRAFT at the Infinity Energy Center in Duluth, GA on Wednesday night which featured another round of Man-Up Challenges and the announcement of the third round of franchise player tags for each club.

In the Man Up Challenge, Braden Smith was spectacular with 17 points to take home the honors among the four quarterbacks featured while wide receiver Joseph Boykin led all offensive receivers with 15 points.  James Gales Jr. from the Heavy Hitters took home the badge for the defenders with nine points as he stood tall defensively in the endzone throughout the challenge. Each player will receive a Power Up award during their week three games on Saturday night.

Each team was given six selections in the six round snake style draft with the Zappers (0-2) selecting quarterback Logan Marchi with the first overall pick.  The drafted players entertained all night with costumes, wrestling and dance moves, and their own personal style during introductions.  Beer Pong, Cornhole, ping pong, and casual Champion gear took control of the playing field once again as players had some time to relax ahead of a critical set of games on Saturday Night.  Watch the entire draft show on the FCF Twitch channel here: https://www.twitch.tv/fcf

All 24 draft selections are located below sorted by team:

It was announced before the draft that Zappers franchise quarterback Johnny Manziel would miss Saturday (2.27.21) night’s game v. Wild Aces after undergoing emergency dental surgery. The 28-year-old Heisman Trophy winner still looking for the Zappers (0-2) first victory, is scheduled to have surgery on Thursday back home in Scottsdale, Arizona. Once returning to the FCF bubble Manziel will not be cleared to play until FCF health-and-safety protocols and quarantine procedures have been met. Manziel is expected to be a special guest appearing during Saturday’s live in-game broadcast on Twitch.tv/FCF starting at 8:00pm ET.

Full game rosters will be released before the Week 3 games on Saturday night.

Fan Controlled Football (FCF) – which combines the passion and competitiveness of live and fantasy sports with the interactivity of video games – is the first platform in professional sports history where fans get to call all the shots, from branding and personnel decisions to real-time play calling. Four teams, led by the biggest names in sports & entertainment, and stacked with professional athletes, begin their championship quest on February 13, 2021, when the inaugural six-week FCF season – Season v1.0 – kicks off in Atlanta, Georgia. Regular and postseason play, in addition to exclusive behind-the-scenes team content and league and team webcasts, will be available via twitch.tv/FCF