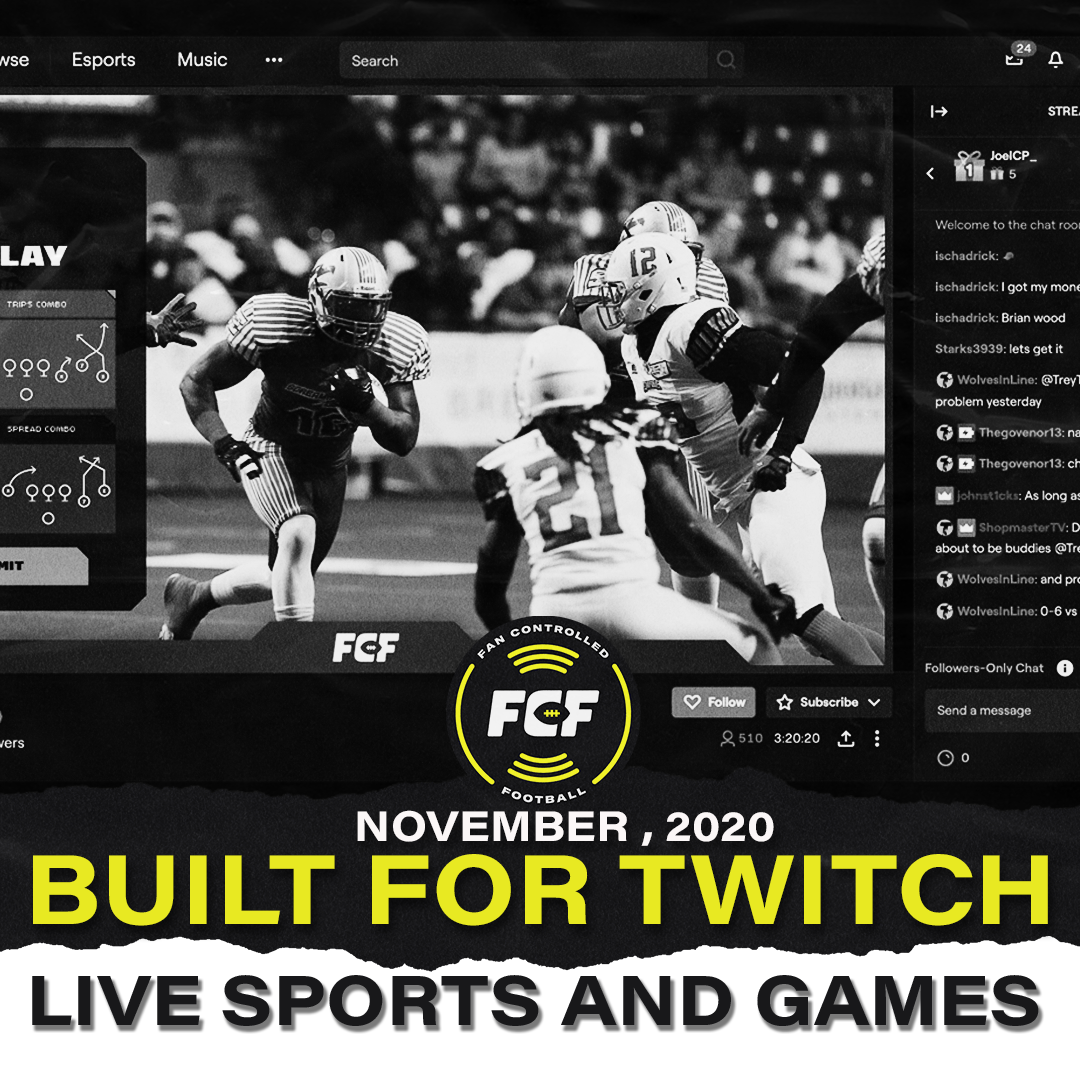 The newest football league was built for Twitch. When the Fan Controlled Football plays its first games in February, viewers will be able to collectively call plays through a Twitch extension built to remind users of Madden NFL’s play-calling screen. Fans will also be able to interact with team members through Twitch chat and watch the action alongside celebrities using Twitch’s co-streaming functionality.

The FCF will change the basic rules of the game far more than the XFL and AAF ever did, starting with a 7-on-7 format and hour-long games. But its bigger bet is on a gamified fan experience. There will be a real field and real players on four real teams, but at the end of the day, “we are building a video game,” co-founder and Chief Gaming Officer Patrick Dees said. Each viewer will get a Fan IQ score based on his or her play-calling ability, with special “power-ups” like extra downs being deployed at key moments.

“The long-term vision is to create a whole new world that sits between gaming and traditional sports,” FCF co-founder and CEO Sohrob Farudi said. Amazon’s livestreaming platform is an ideal testing ground for the endeavor. Although gamers built Twitch to what it is today, the site has increasingly gone after traditional sports fans.

Thursday Night Football games began airing on Twitch when Amazon earned the rights in 2017. “It’s like esports…. without the e,” Twitch explained to its users at the time. NBA G League games streamed there starting in 2017 as well. More recently, Twitch has hosted NWSL matches and launched its own sports channel with content from the likes of Real Madrid and Juventus.

In each case, Twitch has augmented the standard experience with some of its interactive features, but it has never gone as far as FCF plans to go. The FCF hopes to find its core fan base among Twitch’s existing community—a vision aligned with Twitch’s own expectations. The platform’s content SVP Michael Aragon thinks the gamified football league will “feel native” to Twitch’s diehard audience.

“This is going to be the first time we’re going to have this deep integration with sports where there will be an interactive overlay that will allow action in real time. The extensions we have right now—on Thursday Night Football it’s more of a predictive thing, in other sports we’ve done flash sales for merchandise, but this is one where you’ll actually have an impact on the game,” Aragon added. “I even think some of our viewers who aren’t interested in traditional football are going to watch because it’s going to feel like a game to them. It may introduce them to a sport they had no interest in before because of that element of being able to be a part of the content and content creation. That’s the key selling point for our community.”

A critical selling point for FCF, beyond Twitch’s unique ability to actually integrate interactive elements into a direct stream, was the platform’s support. Promotion represented a major part of the league’s two-year deal with Twitch. Beyond that, Twitch personalities have the opportunity to become equity-holding team owners.

FCF’s Twitch strategy extends beyond gamedays, too. Like any successful streamer, the league wants to spend hours online each day, livestreaming practices and film sessions, and encouraging players to stream on their downtime as well. Twitch leadership is hoping other sports will pay attention.

“We want to take elements of what’s happening with FCF and inspire other leagues,” Aragon said. “There are things that may be a little too out there for others, but what we want to do is show what’s possible and be a source of inspiration for all different sports leagues… to get them thinking about what’s next and how they evolve.”

Aragon points to the introduction of fans having some control over the environment as the future of broadcasts, which continue to become increasingly immersive even on more traditional platforms. ESPN and ABC’s broadcasts of XFL games this spring featured betting lines, while Fox Sports’ NLCS and now World Series coverage has featured an interactive video player where fans can toy with the camera angle through the network’s app. That evolution is what Twitch, and FCF, believe will capture the 21st century sports fan.

FCF originally planned to launch in 2020 but delayed its timeline due to COVID-19. Meanwhile, it finalized an undisclosed funding round from big-name investors including Lightspeed Venture Partners, Verizon Ventures and Reddit co-founder Alexis Ohanian.

At the same time, it viewership on Twitch is growing this year as people turned to digital entertainment amid the pandemic. Existing leagues are now focusing more on interactive at-home experiences, and people are getting used to virtual team-building while doing everything from working to working out at home. Football coaching via Zoom even became a thing. If things go well this winter, FCF will consider expanding beyond football; its founders already have their eyes on bringing fans closer to other sports, like baseball.

“The way I look at it is: We are purpose-building this league for an interactive platform,” Farudi said. “This is really a proof point.”