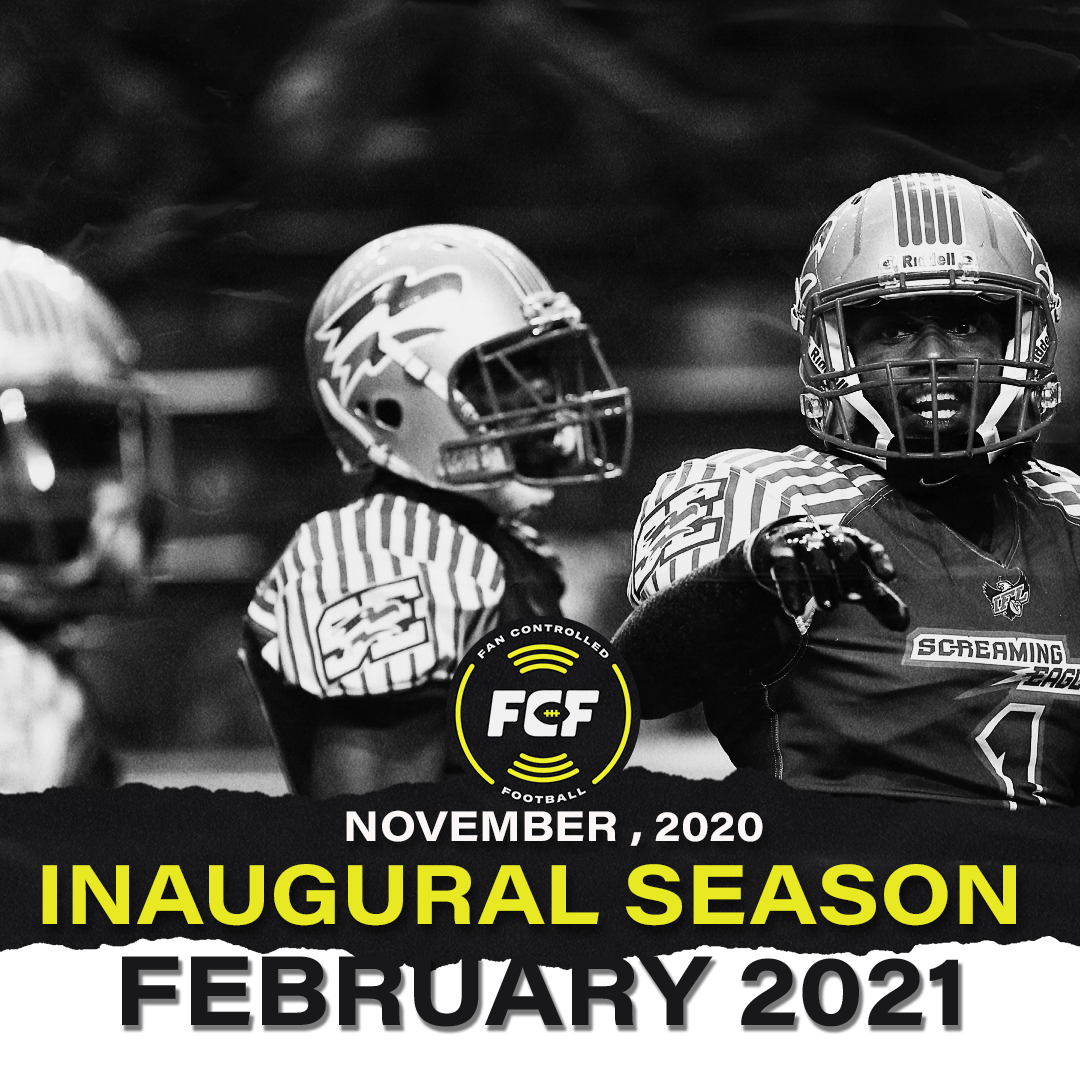 LOS ANGELES, Sept. 22, 2020 /PRNewswire/ — Fan Controlled Football (FCF), the only professional sports league that enables fans to call the plays in real-time, today announced FCF Season v1.0 will launch in February 2021. The league’s premiere season will feature four teams stacked with pro-caliber athletes battling it out over a six-week schedule and will be live-streamed exclusively on Twitch, a premier live, interactive streaming service with content that spans gaming, sports, entertainment, music and more.

“We are pushing boundaries and pioneering a new category of immersive sports that will be a seismic shift in the worlds of sport and entertainment,” said Sohrob Farudi, Co-founder and CEO of Fan Controlled Football. “Fan Controlled Football is IRL meets URL. For the first time in sports history, fans get to call the shots for their team, everything from team branding, player selection, and real-time play calling is decided by the fans. This is the future of sports and we’re excited to co-create history with the fans.”

Adding to the fan experience and immersion, FCF has partnered with some of the most impactful names and personalities in the world of sport and culture to be team owners.

FCF is proud to announce Hip Hop Mogul Quavo of Migos as the newest team owner, joining NFL Super Bowl Champions Richard Sherman and Marshawn Lynch, the baddest man on the planet Mike Tyson, YouTube and podcast empire Kinda Funny led by Greg Miller, and some of the biggest content creators from Twitch‘s community. Each team will have a lead owner and be partnered with other members of the FCF family as part of their ownership group, and together with fans will help shape each team’s personality, identity and destiny on the road to the title.

“We are building a brand and something different in our league – with the fans. They are in control and get to pick the team names, colors, logos, and more,” said Quavo. “I’m really excited because FCF is fast-paced, high-scoring 7v7 football and you are in control. You go from sitting on the couch watching TV and pressing buttons on the remote to actually pressing the buttons on the plays.”

Combining the passion of live sports, the competitiveness of fantasy sports, the interactivity of video games, and the global reach of esports all into a live-streamed, real-life experience, FCF is the first professional sports league to place fans in the general manager role in partnership with team owners. Like video games, fans will have the opportunity to earn achievements and increase their “FAN IQ” and level up to greater impact the decisions throughout the seasons.

Using a custom Twitch Extension, FCF has developed an innovative interactive video overlay for desktop and mobile, allowing fans to call the plays natively on top of the Twitch video player. As the first professional sports league to be fully integrated with Twitch, FCF has an exclusive, multi-season agreement that will bring FCF to Twitch’s community of millions of fans.

“There are times during any sporting event where fans wish they had the opportunity to call the next play, put in a certain athlete, or make big, game-time decisions. Twitch every day provides communities with the tools needed to create interactive experiences, and it is the only place where this type of dynamic relationship between fan and sports team could exist,” said Michael Aragon, SVP of Content at Twitch. “FCF is breaking new ground by giving fans the ability to literally be a part of the game, and we’re thrilled to partner with the league for what will be a defining moment not just in football but for the sports industry at large.”

Featuring elite athletes from NCAA Division I and II programs, the CFL, XFL and IFL, Fan Controlled Football is a fast-paced, high-scoring 7-vs-7 style of football played on a 35-yard x 50-yard field with 10-yard end zones. The six-week season will kick off in February 2021, with four regular-season weeks, one playoff week and a Championship week. Designed for the digital audience and held at FCF’s state-of-the-art facility in Atlanta, each game will be 60 minutes in length and live streamed on Twitch.

Beginning today, fans can register at www.FCF.io to align with their favorite team owner, then start building the teams from the ground up. Throughout the pre-season, fans will have the opportunity to determine team names, colors, logos, uniforms, hire team coaches and other team branding and building opportunities. Additionally, during the season fans will help determine which players make the roster via a weekly fan-run draft, call plays in real-time, make the calls on rule changes and more.

FCF is backed by industry-leading venture partners who are helping drive the innovation and ideas of the future. Lightspeed Venture Partners, FCF’s lead investor, has been at the forefront of launching technology and interactive consumer companies, including Snapchat, Blue Nile, and Epic Games, among others. Verizon Ventures invests in entrepreneurs connecting society and furthering the 5G future. In addition, Correlation Ventures, Basecamp Fund, and Next10 Ventures participated in the round, as well as sports and technology industry veterans Dave Finocchio, Co-Founder at Bleacher Report, and Alexis Ohanian, Co-Founder at Reddit.

More details will be available throughout the pre-season. For more information and to sign up to call the shots, check out www.FCF.io and join the conversation on Twitter @FCFLioand Instagram @fcfl, #FCF, #PowerToTheFans.