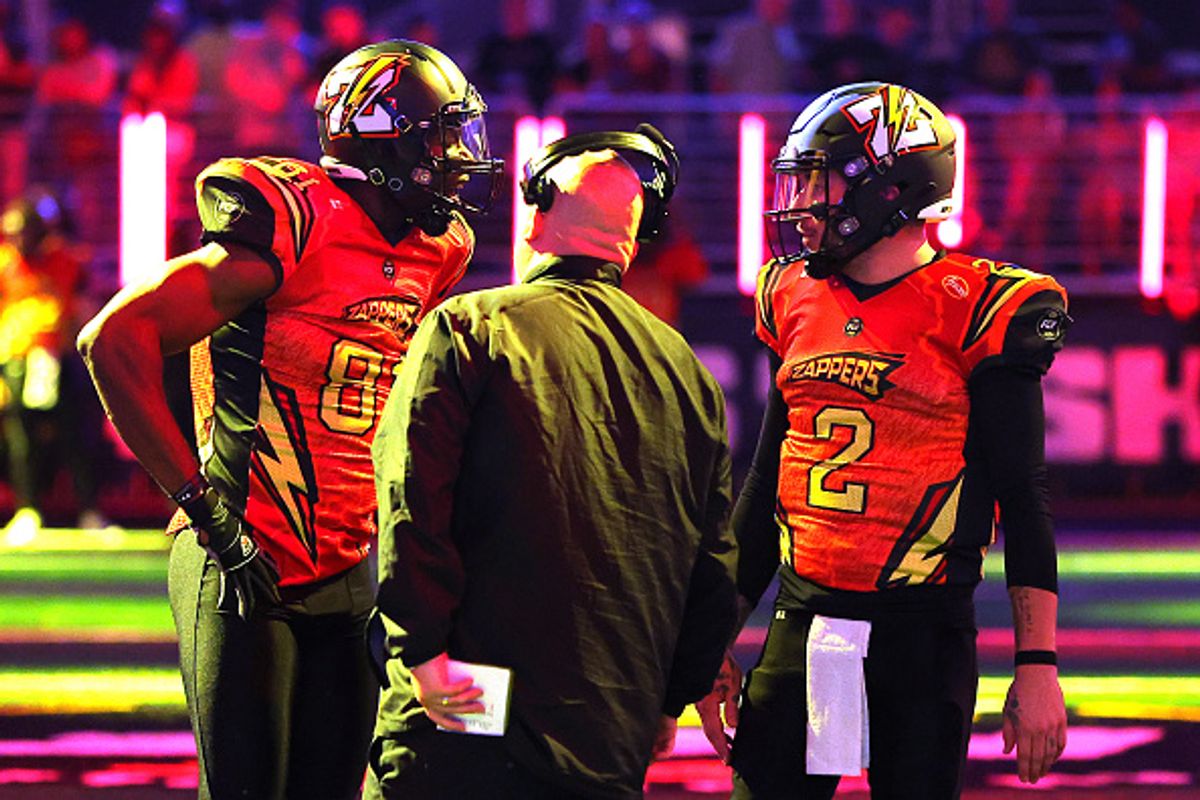 With the introduction of new Head Coach Shawn Liotta, we figured we should give you a deep dive into why he, rightfully so, has earned this title to run our FCF offensive schemes. Coach Liotta has been a part of some high flying offenses, and has received guidance from various mentors and coaches throughout the years. Because of the concepts he learned from others in the football world, Coach Liotta developed one of the most high-scoring offenses seen in recent years at the collegiate and professional levels.

He has led many teams over the years, especially with indoor football teams. Over the 9 seasons as a Head Coach at the professional indoor level, Coach Liotta has established himself as a consistent winner, as proven by his team that set 26 league and national records on the offensive side of the ball. Most notable of all, he has transformed offensive efficiency in the confines of indoor football. His teams have finished as the number one ranked offense in three different professional indoor leagues and has gone to win championships within those leagues as well. If we haven’t convinced you of his success yet, well then we’ll just explain it to you as you keep reading.

Coach Liotta is a HUGE believer in the run-pass option (RPO). In the words of Coach Liotta, “in order to spread the field (as much as possible) you have to make their eyes not right”. It is key to make sure in some way the offenses keep the defense guessing, and one very effective way is through the RPO, especially in a 7-on-7 style of play. While it may seem like players are running all over the place, he clarified that it is also essential to have structure in each play. He implemented more strict route running and assignments to the skill players to minimize any variable that could affect the defense outside of the RPO. This includes the QB dropping straight back instead of rolling out, eliminating wide receiver option routes and giving them ways to clear out defenders and using the speed of the running backs and wide receivers to confuse defenders, both pre and post snap.

Coach Liotta makes it difficult for opposing defenses and forces them to keep their assignments if they want any chance of not letting up the big play that is possible in almost every play. In his first week as FCF’s Head Coach, across all 4 games, there were 17 total touchdowns with only 1 interception thrown, and that interception was an outstanding tip drill catch with no fault to the quarterback. Each team came out swinging, with most teams scoring 30+ points. High flying offense is what makes football fun, and after the games in Week 3, I think everyone would say that the product on the field was moving at a different pace than it was in previous weeks.

Below, we will focus on one of the main pillars of Coach Liotta’s offense that really sent the defense in a frenzy in Week 3: the Jet Sweep.

What is a jet sweep after all? This is when a wide receiver, before the ball is snapped, motions from their original position through the backfield where the quarterback, and sometimes running back are standing before the snap of the ball. The motion attracts the eyes of the defenders, and because of that, there are many ways this type of play can be run. Here are three examples of how dangerous the jet sweep can be:

Option one: a jet sweep motion is simply handing the ball to the motioning receiver. Wide receivers are some of your fastest players on the field, and giving them the opportunity to sprint with a full head of steam laterally to work north to south presents major problems for the defense.

In this play specifically, the Kingpins’ defense is in man coverage and the defensive back is responsible for covering the jetting receiver. However, due to the jet motion and other offensive play options which will be broken down in the next clip, the defender responsible for the receiver gets clipped by his own teammate resulting in a large gain for Bored Ape FC.

This clip has the same jet sweep motion concept with a different offensive formation and unique wrinkle that is deadly, especially in the Progressive Blue Zone. In this clip, the QB essentially has four options: he can hand the ball off to the motion receiver, he can hand the ball off to the running back, he can keep the ball and run it himself, OR he can pass the ball to one of his tight ends or receivers. Ding ding ding! The jet sweep helped greatly in this case because the defensive end, who gets caught between protecting the sweep and the pass, hesitated just enough to allow separation for an easy TD catch to the tight end.

This “pop pass” option is very difficult to defend because there is a big mismatch between the tight end and defensive end, along with the numerous play possibilities that the defense needs to account for in this offensive scheme. The high speed motions ultimately lead to confusion, and big plays, if not defended correctly. Plus, a solid pass from Deondre Francois never hurts.

Same jet sweep concept, but this time, the quarterback keeps the ball for a touchdown run. The QB does a great job of faking the zone run play to the running back, which confuses most of the defense to gravitate towards a player that does not have the ball. The jet sweep caused confusion amongst the linebackers and secondary as defensive responsibilities shifted on a dime to account for the potential jet sweep handoff.

Just look at the defenders frantically pursuing anyone and everyone running full speed! The motioning receiver (who really took the ‘jet’ in jet sweep to heart) also serves as a down field blocker, which ultimately helped QB Tirri Jones waltz into the end zone untouched.

The RPO is such a lethal concept, and you can clearly see how this can trouble the defense all game long. Is the quarterback having an off night throwing? Let him take it on the ground to build up some confidence. Are your receivers getting open with ease? Let the QB air it out and use the speedy wideouts to get massive chunks of yards. This concept is definitely something the fans should keep in mind for the rest of the season, and with squads building some chemistry as the season goes on, it can only go up from here.

FCF isn’t what it is without its high powered offensive plays and this quick hitter concept is a perfect example of the fast tempo of this league. For this play in the 8OKI v. Beasts game, this concept, known as Dino (Dee-no), is run out of an empty set with 3 receivers. Two are lined up on the wide side of the field and one to the short side of the field. The offense realizes that the defense is playing man with no safety over the top, which leaves major vulnerability for routes down the field. The two receivers to the wide side of the field run intermediate routes and the receiver to the short side of the field runs a deep post. Since the defense is playing man, the receivers just need to beat their one-on-one match up to get open, which Joseph Boykin does for a long touchdown pass.

Clearing defenders and making space for others is essential for this style of offense to work, and Coach Liotta, along with the exceptional execution of our players, make it tough to defend. This concept will especially benefit the wide receiving core for each team, so if your team is down and you need to make up some points, look for Dino to get you a shot at an explosive play.

While we can’t spill everything of what’s to come in Week 4 of FCF Season v2.0, we can assure you that the offense is going to keep on scoring, and score often. More route combos will be implemented to get short yardage, and confuse defenses on their assignments. Fans saw a sneak peak for some of the gadget plays last week, and fans should expect to see some more trickery added to the playbook this week.

All of us are looking forward to what else Coach Liotta and these high flying FCF offenses will achieve in Week 4, so be sure to tune in to watch our guys compete with an elite style of play this Saturday.