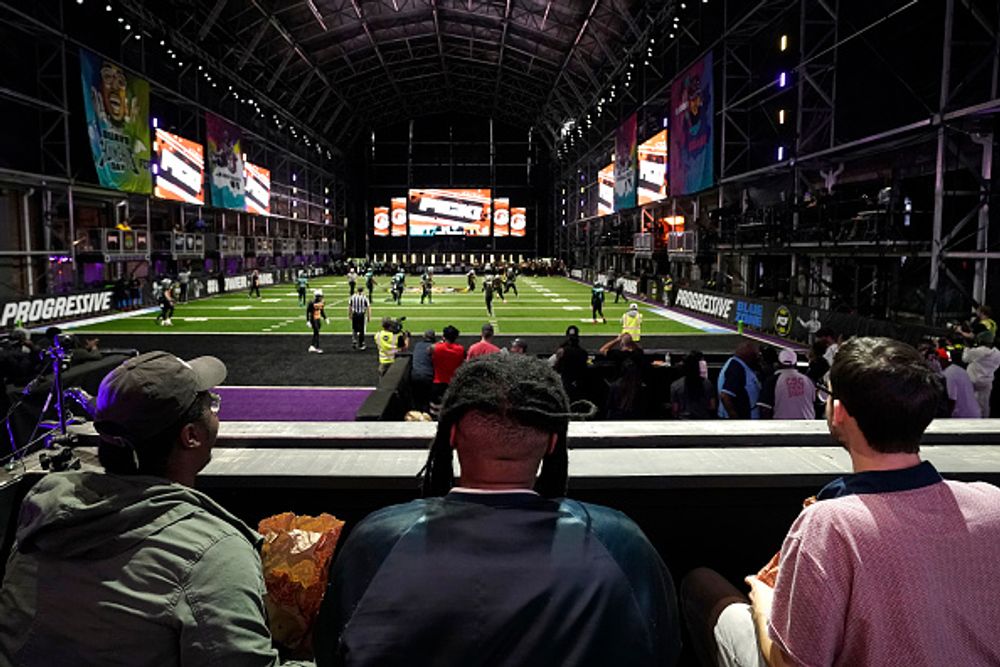 Read below about the contest rules after entering into the Hornitos Gameday Experience!

In return for the opportunity to participate in the HORNITOS GAMEDAY EXPERIENCE described herein (the “Contest”), Fanchise League Company, LLC, a Delaware limited liability company, d/b/a Fanchise and Fan Controlled Football (“Company” or “FCF”) located at 2629 Manhattan Drive, Unit 292, Hermosa Beach, CA 90254, and Sauza Tequila Import Company, Inc., d/b/a Hornitos (“Sponsor”) located at 222 W. Merchandise Mart Plaza, Suite 1600, Chicago, IL 60654 require your agreement to comply with and be bound by the terms and conditions set forth below (the “Official Rules”).

2. ELIGIBILITY. NO PURCHASE NECESSARY TO ENTER OR WIN. Only legal residents of the United States who are twenty-one (21) years of age or older as of April 25, 2022, are eligible to participate in this Contest. Employees and immediate family members (spouses, parents, siblings and children) of employees of Company or FCF, Sponsor, and each of their respective parents, subsidiaries, affiliates, directors, officers, partners, employees, and agents are not eligible to enter. The Contest is void wherever prohibited or restricted by law.

3. ENTRIES. LIMIT OF ONE (1) ENTRY PER PERSON. To enter the Contest participants must register votes via a website and/or mobile application designated by FCF and communicated through contest promotions and advertisements. Participants will be limited to casting one vote per day during the Contest Period (although voting everyday will not necessarily increase participant odds of winning). Entries must be received during the Contest Period to be eligible. Any Entry received thereafter and/or not properly submitted will not be eligible to participate in the Contest. A person who timely submits a properly completed Entry in accordance with the procedures herein is considered an “Entrant.” By submitting a properly completed Entry, each Entrant acknowledges that he has read, understands and agrees to be bound by these Official Rules.

4. SELECTION OF WINNER. One (1) winner (the “Winner”) will be selected in a random drawing conducted by FCF from among all eligible Entries received during the Contest Period. The Winner will be notified on or about May 31, 2022. By participating, each Entrant agrees to these rules and the decisions of FCF and/or Sponsor, which shall be final and legally binding in all matters relating to this Contest. FCF reserves the right to conduct a background check of each Entrant and to disqualify any Entrant, effective upon written notice, if such Entrant commits, or has at any time committed, any act or becomes involved in, or has at any time been involved in, any situation or occurrence which act, situation or occurrence tends in the sole opinion of FCF to subject Entrant, FCF and/or Sponsor to any ridicule, contempt or scandal or which, in the sole opinion of the FCF, reflects unfavorably upon the FCF and/or Sponsor. If any potential Winner cannot be contacted after the first attempt, declines the Prize, or fails to pick up the Prize within two (2) days of being notified that he is the Winner, then such Winner will forfeit the right to be the Winner, and Sponsor may select a replacement Winner from among all remaining eligible entries.

5. PRIZE DESCRIPTION; ODDS. The Winner will receive: (i) two (2) VIP tickets to the FCF Peoples Championship game at Pullman Yards in Atlanta, Georgia, to be selected by FCF in its sole discretion; and (ii) complimentary flight and hotel accommodations to be provided and arranged by FCF (collectively, the “Prize”) and courtesy of Hornitos Tequila. All aspects of the Prize, including but not limited to the selection of the travel accommodations and seat locations shall be determined by the FCF and Sponsor in their sole discretion, and any tickets shall be subject to all FCF rules, regulations, guidelines, policies and restrictions and to the same rules and regulations as regularly sold tickets. The odds of winning will depend on the number of eligible Entries received. Winner may not sell, assign, transfer or substitute the Prize (or any portion of the Prize) or redeem the Prize (or any portion of the Prize) for cash value. The Winner will be responsible for any federal, state and local taxes associated with the Prize and for any expenses associated with the Prize. The Winner may be required to sign, at the request of and in the sole discretion of the FCF and/or Sponsor, a Release, an Affidavit of Eligibility and/or a Prize Acceptance Form in order to receive the Prize. The FCF and Sponsor reserve the right to substitute the Prize (or any portion of the Prize) with any prize of greater or equal value.

6. LIMITATIONS ON LIABILITY. Neither the FCF nor Sponsor shall be responsible for Entries that are incomplete, improperly submitted, misdirected, lost, late, damaged or Entries submitted by participants under the age of 21 which will not be counted. All Entries become the property of the FCF and/or Sponsor and will not be acknowledged or returned. By entering, each Entrant agrees to HOLD HARMLESS AND INDEMNIFY the FCF, Sponsor, and each of their respective partners, parents, subsidiaries, affiliates, directors, officers, employees, and agents (the “Released Parties”) from any and all liability, damages, claims and causes of action (however named or described) with respect to or arising out of (a) Entrant’s participation in this Contest, (b) Entrant’s Entry or any registration material on any related website, (c) any typographical or other error in these Official Rules or (d) the receipt and/or use of the Prize or any replacement prize that may be awarded herein, including any travel associated with the Prize.

7. CONSENT OF USE. Each Entrant hereby agrees and consents, without further authorization, compensation or remuneration of any kind, to the editing, modification, replication, publication and/or other use of the names, likenesses, photographs, voices, Entries and the like of each Entrant in any medium, whether now known or hereafter developed, including without limitation, the FCF website and in any and all advertising, promotions, and other publicity conducted by Sponsor, the FCF and each of their respective partners, parents, subsidiaries, affiliates, directors, officers, owners, employees, and agents, except where prohibited by law. Notwithstanding the generality of the foregoing, each Entrant further assigns any and all rights he or she may have over his or her Entry to the FCF and Sponsor without further authorization, compensation or remuneration of any kind.

9. DISPUTES. This Contest shall be governed by and construed in accordance with the laws of the State of Delaware, without regard to principles of conflicts of laws. EACH ENTRANT HEREBY WAIVES ANY AND ALL OBJECTIONS TO JURISDICTION AND VENUE IN THOSE COURTS AND SUBMITS TO THE JURISDICTION OF THOSE COURTS. Each Entrant agrees that any controversy, dispute or claim arising out of, relating to or connected with the Contest shall be resolved individually, without resort to any form of class action, and exclusively by arbitration, which will be conducted in Los Angeles, California in accordance with the Commercial Arbitration Rules of the American Arbitration Association (“AAA”), and any judgment on the award rendered by the arbitrator may be entered by any court having jurisdiction thereof. The arbitrator shall be selected by mutual agreement of the parties, if possible, and shall be a resident of Los Angeles, California. If the parties fail to reach agreement upon the appointment of an arbitrator within thirty (30) days following receipt by one party of the other party’s notice of desire to arbitrate, the arbitrator shall be selected from a list or lists of persons submitted by the AAA. The selection process shall be that which is set forth in the AAA Commercial Arbitration Rules then prevailing, except that if the parties fail to select an arbitrator from one or more lists, AAA shall not have the power to make an appointment but shall continue to submit additional lists until an arbitrator has been selected. Under no circumstances will Entrant be permitted to obtain any punitive, incidental, special, consequential and/or other damages, including without limitation lost profits (collectively, “Special Damages”) to an Entrant; and Entrant hereby waives all rights to claim Special Damages and all rights to have such damages multiplied or increased.

10. FORCE MAJEURE. Neither the FCF nor Sponsor shall be responsible for the failure or interruption of any website and/or webpage mentioned herein, www.rockets.com, or of the cancellation or postponement of the FCF Championship game or any drawing for any reason including, but not limited to, equipment failure or malfunction, electrical service interruption, or any act of God. In addition, in the event that the FCF or Sponsor is prevented from continuing with the Contest by any event beyond its control, including, but not limited to, fire, flood, hurricane, epidemic, earthquake, explosion, labor dispute or strike, act of God or public enemy, communications or equipment failure, utility or service interruptions, riot or civil disturbance, terrorist threat or activity, war (declared or undeclared), interference with the Contest by any party, or any federal state or local government law, order, or regulation, order of any court or jurisdiction, or other cause not reasonably within the FCF’s and/or Sponsor’s control, FCF and/or Sponsor shall have the right to modify, suspend or terminate the Contest.

11. MARKETING DISCLAIMER. By entering the contest, each Entrant agrees to receive communications from the FCF and/or Sponsor, subject to opting out when Entrant so desires. Entrant’s information will not be shared or sold to any outside party.