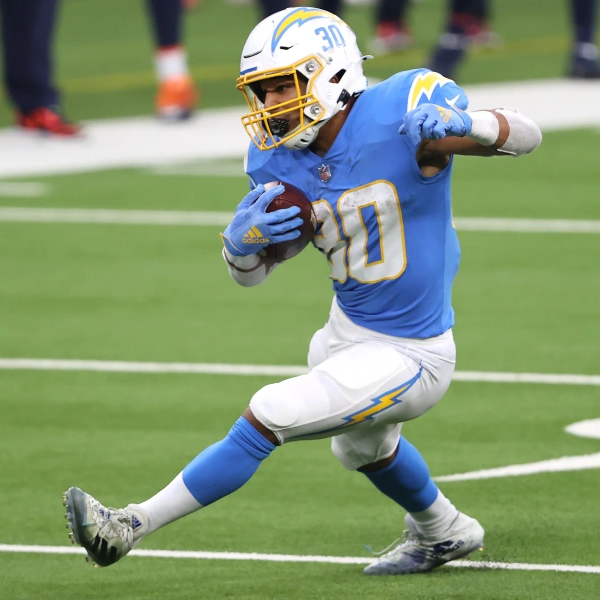 Football, to some players and some fans, is a means for entertainment and an outlet for fandom at the highest level that sports can allow. Yet, for some players and even fans, football is a platform for more than just a product on a screen, jersey sales, and the brightest lights. For those individuals, football is more than just a game, it’s an opportunity that can change not only their lives, but the lives of others. It’s a platform to spread good, through charity, camps for the local kids, social justice, and other means. One of the players, Austin Ekeler, epitomizes maximizing football for the good of other guy’s looking to get the opportunity of a lifetime to play football at the pro level. His outlook on being an owner in the FCF is unique, being an active, elite, NFL running back, he plays the game at the level almost every FCF player aspires to be at, he sees every angle. This week in the state of the art Pullman Yard’s FCF facility, I got the unique opportunity to interview Austin one on one, and gathered his thoughts on being an owner of the FCF’s Shoulda Been Stars, and the unique perspective he carries because of his status as a current player.

For Austin, we started off with a simple yet compelling overall ask, what drew him to be an owner of a football team, specifically a fan controlled football team. The answer was easy, he wanted more community involvement. For context, as time has gone on, Austin has stretched from a football player to a widespread personality. He streams on twitch, it gives an authentic look into the window of him, on stream he isn’t bruising through linemen for a game, it’s a look at Austin Ekeler, not a running back. It stretched farther than just games on stream, soon enough it was large scale giveaways and soon after that it was meet and greets. As I write this right now, Austin is on stream talking about the next FCF draft for week 2, it’s interaction at a level few people provide. It was a match made in football heaven, for Austin the pairing of the fan controlled element being able to tie his community in further and keep them involved, while not straying from the DNA that people found him in, football, was too perfect to pass up.

“I was big into community involvement and really trying to get my community, some other substance of myself, of Austin.”

It wasn’t just the community involvement that he loved, outside of the reach he would see with his community, the FCF provides a special opportunity. Pro football, no matter how its cut, is an honor to play in, the unmatched level of competition and the bright lights allude so many, yet for those who dig, they find themselves on field later in life after college concludes. The FCF gives that to the players, the opportunity to fulfill dreams and play pro football, with people in the stands, their jerseys on their backs, and millions watching from home. This chance beyond the doors of the NCAA,  JUCO, and other college avenues, drew Austin in with, as he put it, the layers.

“At the same time, it also provided an opportunity to guys trying to continue their football career, to continue to play.”

Austin isn’t new to the FCF either, for those who don’t know, last season on the now defunct Wild Ace’s (rebranded to the SBS), he won a title at the helm. For a guy whose job has an end goal of a ring on a finger, it was a center of conversation between us as a lot wondered how it felt to win a championship. He even remembered the point deficit, 16 points, and the play to seal at all, Crouch at the line. He loved it, the livestreamed prep, the way the fans put it together, and it felt like they put something together as a community. The title wasn’t just one they watched, it was a curated community effort that they all had involvement in, and it was special.

“It made us feel like, hey we’re connected, we did something great together. Not just the team, but the fans as well.”

One of the more requested questions came after the signing of TO, and although Austin is only 26, could he see himself playing in a league like this later down the road. There’s a lot of time, but the answer aligns with everything that came before it. His love for football has changed as he worked through the NFL. At first? It was about the game, but as he’s gone through the league, his love has shifted to the platform of the league. The opportunity is hard to emulate in other leagues, and for him playing he says he doesn’t ever see himself playing at an insane age “not pulling a TO” but as an owner? Absolutely.

“As I’ve gotten older, it’s become more of a love of the platform of the NFL.”

Thank you again to Austin, really awesome insight into just how he looks at his role as an owner and just why he came around to being one. You can check out Austin on all social media (AustinEkeler on Instagram and Twitter) as well as the Austin Ekeler Foundation online. Which he built to help people pursue their passions, just like his football pushing in the FCF, he’s pushing communities and their dreams as well. The SBS got a great owner, whether he’s pushing players or community members forward, Austin is changing those around him constantly.