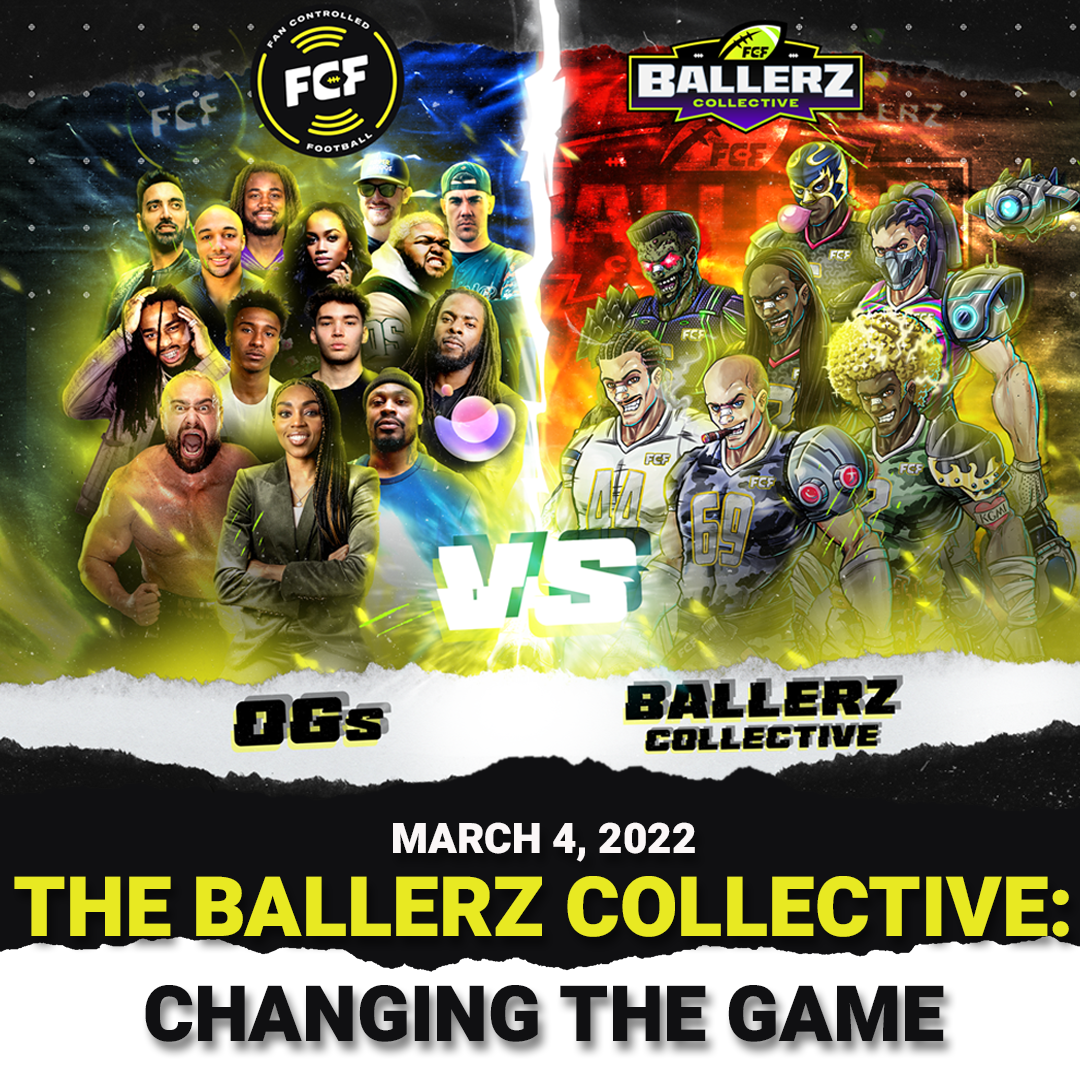 It started in 2015. A few people came together with an impossible, yet groundbreaking, idea: buy a football team and put the fans in control. And that is just what they did, letting fans pick the name and design the logo, choose the jerseys, pick the players that made the roster, and call the plays in real-time. It led to the even grander idea of an entire league of fan-controlled teams.

Season One of Fan Controlled Football was a great success; the league spawned four new teams with names and logos chosen by the fans (Beasts, Glacier Boyz, Wild Aces, Zappers). Team owners for these original teams include big names like Marshawn Lynch and Quavo to name a few. FCF was never a one-season thing though. The founders had big dreams and huge plans for where this league would go.

Enter The Ballerz Collective: a NFT “project” that isn’t a project at all. Instead, it’s a gateway to experience football from the turf-up. Four new teams built by fans with careful input by team owners/founders, each with a unique Ballerz Collective collection. Team owners are prominent in the NFT community and represent their own unique NFT collections.

And who are these team owners? 888 Crypto is a big name in the NFT world, and he joins the superstar DJ Steve Aoki in owning team 8oki. The Knights of Degen own team Knights of Degen and plan to get medieval on the competition. Members of the Gutter Cat Gang community own team Kingpins and are gunning for the crown. Last but not least, members of the Bored Ape Yacht Club community own team Bored Ape Football Club and promise to make things anything but boring.

That brings us to the Ballerz Collective NFTs themselves: Each collection contains 8,888 Ballerz, each with a combination of over 150 unique traits. There are a number of traits that are static to the character, but what makes these avatars unique is the traits that AREN’T permanent. Special limited gear items are not only removable and swappable, but they have utility both IRL and beyond. The Gold Crown traits gets you VIP access for two for 1 game a season, FOR LIFE. The Gold Jersey trait gets you one game-worn signed jersey every season, FOR LIFE. These benefits are just the tip of the iceberg, with many more just on the horizon.

Season 2 starts mid-April, and fans from both the OG teams and the new teams will be able to participate in the soul of the game: real-time play calling. Voting (done on the website and/or app) determines what your team does on the field and some votes have more weight than others. Remember those gear traits? Some of them could make or break your team’s success by way of enhanced voting power. The success of each team is dictated by the fans.

When the season is over, FCF has no plans to stay dormant until the next year. There are big plans on the horizon to expand every aspect of the league. Things like a gear item marketplace, token staking, and a P2E game are all in the near future. FCF is just the beginning of something that is going to change the way we think about football and sports in general. The future of sports is fan-controlled!