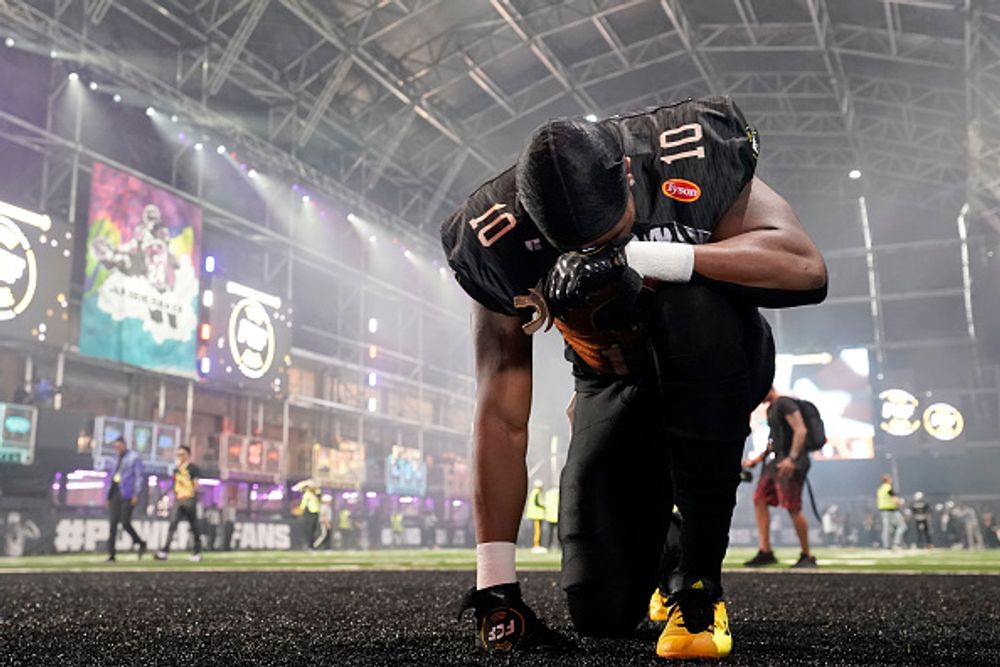 HISTORY! GROUND BREAKING! THE FIRST SHUTOUT IN FCF HISTORY! Back on the trend, we have yet another week that was wildly different from the ones that came before it. We got treated to the full spectrum of outcomes this time around, from shutouts to close games, I’ll try to keep this recap on the shorter side, no promises.

It really feels like the Boyz have avoided catching a single break this season, but also catching as many as they seem to miss? Their quarterback controversy might be worse than the Zappers before Kelly Bryant. It’s hard to tell if this week was a step forward for them, or a step backwards, so we’ll just call it lateral movement.

On the Apes side, they looked dominant until the very end. Their scoring was balanced, they scored twice in each half, and put up 28 points on a ridiculous 13 plays, an FCF low as far as I know. They called only 4 pass plays, one of which was a touchdown, and Francois went 3 for 4 in the air, while adding a score on the ground. Darren Woods continued to be dominant in his small volume touches, as he added yet another rushing score this week. Not only that, but the defense came up big, as Qwantez Stiggers scooped a fumble for a TD that he took all the way back. The end score is close, but it never really felt like that, they barely played offense, and when they did? It was automatic.

The Boyz were the utter opposite, Devlin Isadore put up yet another underwhelming performance in comparison to his debut, but it’s become increasingly apparent why. On a combined sack, Cecil Cherry laid down a hit that came into contact with Izzy’s ankle, and his reaction was very, very loud. He’s been battling this foot injury since last week, and he looked physically hindered as he put up a 2 for 9 effort in the air, and had as many interceptions as he did completions. Late in the second half, Izzy went down again, and as heard on the helmet mic, immediately said it felt like his MCL was blown. In case you’re keeping count, that’s two GB QB’s down to potential season ending injuries this year. Chris Barrett, a loud and colorful online presence who struck a note with the fans to get drafted, finally got a real opportunity,and  he didn’t disappoint. Chris played to the tune of 6 for 11 in the air, 103 passing yards, and 2 passing touchdowns in a 1:38 of game clock. Did it pull out the win? No, but for what it’s worth the temporary success story of Chris was enough to bring the GB fans together, and virtually everyone is rallying around him for next week. They may be 1-3, but for the third time this year, they might be set at Quarterback yet again.

For the 8oki’s, yet another tough blowout loss seemed to hinder their playoff hopes, as they struggled to get a rhythm and their first half mojo got thrown under a bus. The Knights continue to prove that they’re a top of the line organization with superb play calling, drafting, and ultimately wins.

The 8oki’s see two sides of the coin every week, whether it’s the first or the second half, one of the two has absolutely no rhythm. This week, the introduction of the 999x vote for certain NFT holders, saw the 8oki’s opening drive of the second half get 4 consecutive trick plays that ultimately ended up in an interception from WR Patrick Smith. Regardless of your opinion on that whole run, it killed the momentum that they set up from their 3 score first half. Mitch had a good week, nothing stellar, but a 6 for 13 passing attack and 2 scores in the air, while adding 31 yards on the ground and a rushing score, was enough until the second half began. While the 8oki’s scored 3 times in the first half, they were completely shutout in the second half. The big positive is the continued breakout of Patrick Smith, who hauled in 4 receptions for 31 yards, and a receiving touchdown that saw highlight reels.

Full steam ahead for the Knights, they pounded their ground game and put together 4 total rushing touchdowns, and 76 yards on the ground. (5.1 YPC on 15 total carries) Ed Crouch, continues to dominate, going 6 for 10 in the air, throwing a touchdown, and rushing for 2 more, the offense just continues to flow through him and its potent, and overwhelming for opposing teams. That’s really the ultimate descriptor for these Knights, overwhelming, whether it’s their ridiculous coordination in discords or on the field, don’t expect them to slow down anytime soon.

History! It happened, the first ever FCF shutout, and the Zappers are officially lost. It’s no longer a salvageable situation for this team as the focus should shift to forming the culture and the future of the team. Insults keep adding up with the injuries, actual injuries that feel backbreaking.

Alphonso Howard continues to impress at a high level, he’s yet another success story that you just can’t not like watching. Phonso tossed an 8 for 16 game in the air, 124 passing yards, and a passing touchdown. It doesn’t stop there however, he also ran 6 times for 57 yards (ridiculous 9.5 YPC) and added 2 rushing touchdowns. The Beasts should be owed a formal apology from the broadcast booth for the flack they got for passing on Stew, and an apology from me as well. Beasts fans. I’m sorry, you were right, and I was very very wrong, Alphonso Howard is the best jump I’ve seen this season, congrats. Jordus Smith continues to perform as well, with a rushing and a receiving touchdown, and the Beasts genuinely look like a well oiled machine as they hit the .500 mark.

Kelly Bryant, may be gone as quickly as he showed up, in the middle of a miserable game where he went 1 for 4, he went down with what seemed to be a leg injury at the half. He didn’t return after, and I still have no report on his status. It’s a really tough break, the first glimmer of hope was gone in a game and a half, and the next man up? Let’s just hope they find their Brandon Silvers on the open market. I openly criticized the Brian Allen pick when it happened, because Jason Stewart was on the board, and this game was pretty much exactly why. In a shutout loss, Brian Allen went 1 for 7, and threw 3 interceptions. There wasn’t exactly a positive to draw from this one, I feel as if the 23 yard sack that the Zappers gave the Beasts, who then came back from a 3rd and 40 to score is the perfect sequence to sum this one up, one to forget.

HISTORY AGAIN! (Not really, but Tirri Jones is on the board baby, he’s on the board) The undefeated Stars last week saw proclamations of being the team to beat by some across various social media platforms, and were given a very hard reality check by the winless Pins.

For the Stars, I feel as if the mortality of lacking an elite playmaking arm finally showed, and let me clarify before I continue. I believe Slade is an above average QB who’s been able to lead his team to some pretty incredible wins, but the Stars really struggled to combat the explosiveness of Tirri Jones. Slade went 8 for 18 in the air, had 105 passing yards and a passing touchdown, yet the Stars failed to convert a 2 point play in the last 20 seconds of the game to make it a one score gap, and then proceeded to fail the onside kick attempt. In the long term, these small misses all added up to each other, like a last gasp drive in the final seconds of the first half where Slade threw up an interception. The game just felt messy, 3 fumbles characterizes the type of night it was for the previously undefeated squad.

Tirri Jones on the other hand, finally pulled off what some debated he couldn’t as he fought for his starting job this week. It was another weak performance in the air, he went 2 for 9 for 34 yards and a passing touchdown. Tirri made up for it on the ground, as he rushed 7 times for 61 yards and 2 more rushing touchdowns, while Daryl Virgies also added another score on the ground. Was it a masterclass? No, but for the first time, the Pins saw success with their team and it was refreshing to see TJ get the love he rightfully deserved all along. I hope for the sake of the dynamics in the Pins offense, that Tirri figures out his passing game, but it really didn’t matter this week. I’ll hold off my judgment this time around, congrats Kingpins, you all deserve to enjoy this win, it’s a big one.

No MVP Ladder??? Nope, not yet, the mid season top 10 is in the works and will be finished soon enough for a more in depth and open look at the upcoming award races. Stay tuned.