FCF Draft Almanac #4: Complete review of the 2 round unit draft 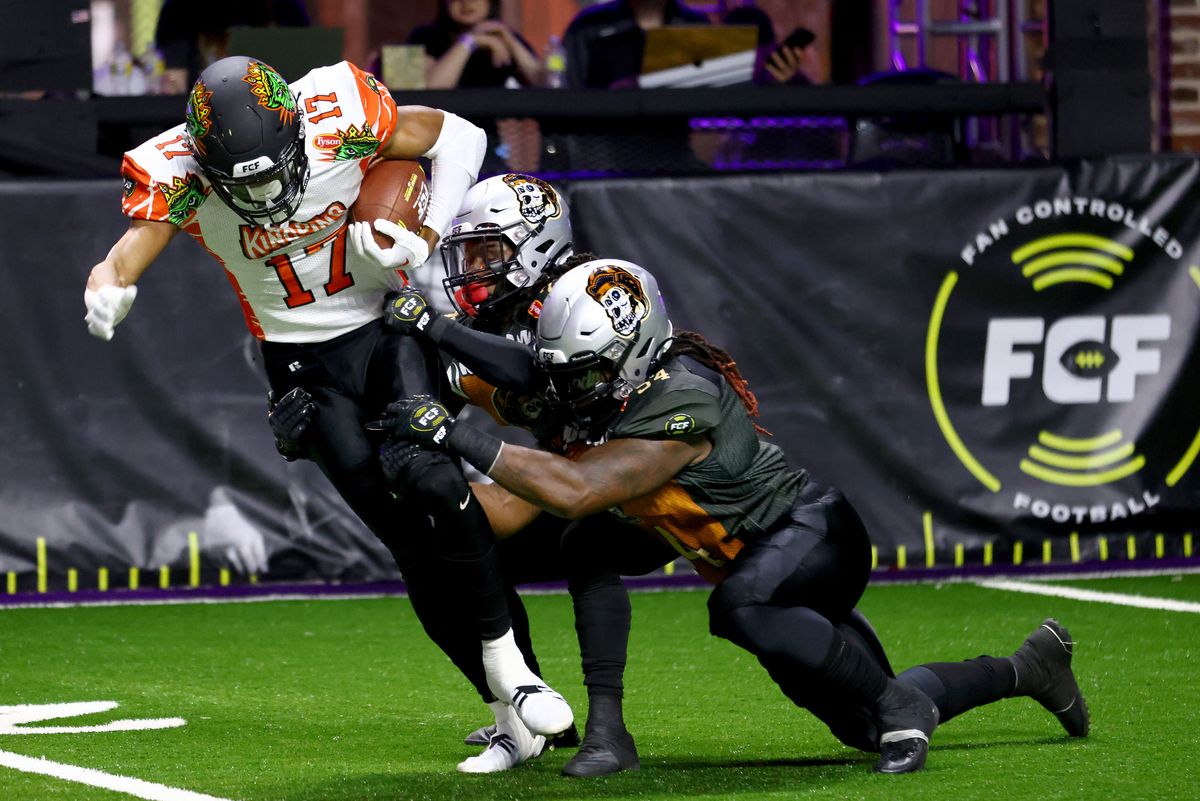 For the first time in FCF history, the draft was officially shortened to 2 rounds, and the only available picks on the board were the unit packages. The order was the standard reverse standings set, which means once again the Zappers sat at the top of the board. The man up challenge came down to Qwantez Stiggers against Mitch Kidd and Justin Nicholls, ultimately Stiggers walked away with this week’s power-up. It’s time to review, in what will definitely end up being the fastest Almanac to date, what happened in the 4th draft of FCF season v2.0!

Kelly Bryant. Protect him. Oh wait. The Zappers have seen a glimmer of hope as they watched their new QB Kelly Bryant tear up the opposition in his debut. The problem remains, they still have yet to touch the win column at all and sit dead last in the standings. To be honest, I felt the pick here was obvious, give Clemson standout Bryant time to operate and let the rewards come off of his arm. They went in the other direction and instead selected the top defense on the board. I don’t hate the pick, and it very well could work out, however as we drift back around to them, you’ll see why this could cause some major problems in their quest for a second half resurgence.

Tirri Jones. Protect him. Oh wait. Sounds familiar because it is, the Pins have debatably a bigger hole to fill at O Line considering Tirri has played behind lines with a cumulative record of 3-9, yet they weren’t the pick here. Tirri is noticeably inaccurate on the run, so much so that I struggle to look over this missed pick even though they got the best defensive unit out of the draft. More often than not this season the winners of games have been the ones who can execute on offense down the stretch, Tirri has not had time to do so. Not only that but the Pins ownership recently signed XFL QB Brandon Silvers for next week who is incredibly immobile and a steady pocket passer. The Pins did not create a pocket, they opted for defense instead, this one feels like a bit more of a miss than the Zappers pick. Hopefully Slick Nick can find a way to lead the team to their first win on the season

I think the first round weirdness stretches to this pick too. The beasts, who are looking for Alphonso Howard to continue proving himself next week, are coming off a loss in which they conceded a game winning sack. They also could have looked at the lines here but Howard is ridiculously mobile so for that I give them a few points. I just can’t help but worry for this defense, sure they won the power up but last week both star corners, Mike Lee and Qwantez Stiggers, went down to injuries. Stiggers is obviously back, and this is the unit that even placed the game winning sack on the beastsl;ast week, but you can’t not look at them getting bruised up for 39:16 of game clock last week and not be a little uneasy. This one is up in the air, the Beasts will look to advance to 2-2 this week.

Okay, time to spread some love. I think the Shut Down Squad is a great unit, and although you can say “but the hitmen were on the board”!!!  This is a solid group that I feel has sort of slipped the cracks this season. Roman Tatum, Marquis Cain, and Marquill Osborne form a truly talented trio in the secondary, and I just love this squad. Could they have gone O Line? Yes, Izzy has gotten banged up already, and protecting him should be a high priority however this is a selection I just can’t dislike.

The 8oki’s were the first to take the jump on the Hitmen this week, and they boast the second best W-L record in the FCF behind the block. I like the Hitmen as a group a lot, and I’ve heard whispers about them getting an athletic Linebacker addition to the group that will further bolster the talent. This group has been silent in winning games yet it’s been efficient, they were unnoticed in week 1 and have slowly risen the ranks. However, Mitch Kidd is a pocket passer at heart and although he can be elusive, it’s not hard to wonder why the 8oki fan’s passed on protection for their superstar QB. Let’s hope one falls far enough to snatch or else this could be a poor decision.

Controversy in online spaces has led to a lot of discourse on this pick, and the Knights draft in general. Let’s start with the obvious, the Knights group is obviously very invested in their scouting and have made a ton of finesse picks that have worked out, and continue to dominate draft nights. Yet, this one made me raise an eyebrow as well, because the Wall is on the board, and the Force Field has struggled this season. Let’s also address the obvious, yes they have won games, however my overview of their play has been subpar from what I’ve seen. Considering the other angle, Debrossard is a starting guard for the Wall who’s going to be missing some time, however his strengths are in the run game, not pass protection. Toss up here, good luck Knights.

Pick #7 – Shoulda Been Stars – The Hitmen

The Stars are winning so what would I know about them operating on poor drafting, however once again a genuine argument could be made for O Line here. Slade got absolutely busted up last week and could use an elite protecting line, their superstar Ladarius Galloway is a running back who thrives off of hitting holes however the Stars will get to pick on the wraparound here shortly so there’s not much to complain about. The Hitmen as stated before are winners, have incoming talent, and project to continue their great play, this is a nice grab by the undefeated Stars.

The Apes get two picks back to back here, I’ll refrain from going in a circle and explaining the FF dilemma again, but the Wall is still on the board, so this could be a gamble. However, the most recent play breakdown for the Apes had them at…16 rushes to 6 passes, so it looks like they’ll be fine regardless, they are undefeated after all.

To avoid going in circles and re-explaining each unit twice, the second round might be a little shorter, aside from a few unique situations.

Injury concerns aside, the Apes getting the hitters is still far from the worst that it could be. They need to stay on the field and stay healthy but this team takes ridiculous time on offense working in methodical runs with sparing passes and will give their defense a helping hand in that sense. BAFC looks to go 4-0 this week and remain at the top of the leaderboards.

Laugh. Out. Loud. Imagine getting a great defense and then adding a tested winning line to supplement the holes that the stars have in terms of QB mobility. The stars don’t need to imagine, and the rich get richer. Plain and simple. Slade and Gway will hunt for their 4th win this week to stay undefeated.

Sorry in advance to the Knights, but I struggle with this pick a ton. To start, this is maybe the most important game so far for both the Knights and their division rivals, 8oki. Why? They both sit at 2-1 and in a tight race for the second playoff spot behind the undefeated Apes, dropping to 2-2 while one rises to 3-1 is a big time disadvantage. I just said I loved this group, so why do I dislike this pick? Because the Knights failed to play the schedule. The Glacier Boyz play the first game of the day and get the fresh and reset SDS, while the Knights play 20 minutes after in the second game and get a defense that just played a full game. I understand this was an auto pick, but these are the disadvantages that can hover on teams and lose them games. This is a tough break for such an involved group, good luck in the big time matchup this week Knights.

The 8oki group has the same set as the Stars unit packages and I love them both for similar reasons. 8oki caught a break with the defensive selections before them to force the Knights hand into taking a double session defensive squad, and they will need to capitalize to take a step towards securing a playoff spot this season. The Cardiac Kidd and Boykin will look to lead the charge, best of luck.

Both the Boyz and the Beasts selected the Trenchmen to avoid the last unit on the list, and although it could be worse, it could also be much better. Phonso and Izzy both are mobile enough to operate without elite protection but you never want to chance it in such a short season, nonetheless they did, and both teams are aiming to finish this week 2-2 and break even at the half.

The Pins and the Zappers walked in with offensive line concerns, and will walk out with them as well. Block Party is 1-5 on the year, and has a single win riding Mitch Kidd’s game winning TD in week 1. This is a super unfortunate but super foreseeable outcome. To me at least, the defenses are closer and all have some spots where the shine where as the O Lines are pretty clearly cut, both Kelly Bryant and Tirri Jones (or Brandon Silvers who knows) are going to play behind the worst performing line of the season, and who knows, maybe they turn it around. If they don’t? I hope they’re ready to roll (out), good luck to both as they are a combined 0-6 and are desperate for their first wins of the season.