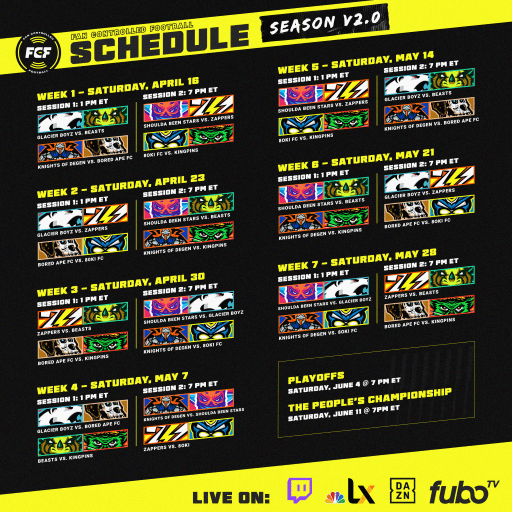 The league’s new sponsors will join a well-established list of returning partners, which include Progressive Insurance, Wendy’s, Great Clips and Kinexon, among others.

FCF’s second season will debut at the league’s new, state-of-the-art production studio at the historic Pratt-Pullman Yards in Atlanta. In addition, fans will have more ways than ever to experience the action with a variety of tune-in options, including regular and postseason games available on Twitch NBCLX, Peacock, and internationally via DAZN. NBCLX will kick off gameday coverage with The People’s Pregame, available prior to each gameday session and hosted by Kahlief Adams, the 30-minute show will feature FCF experts, including players and team owners as guests.

Moreover, the sports-first live TV streaming platform Fubo Sports Network, the live, free-to-consumer TV network from sports-first live TV streaming platform fuboTV, will be shooting a unique live television experience featuring NFL Hall of Famer Terrell Owens. The companion show will be available exclusively on fuboTV’s linear network, Fubo Sports Network across the U.S. and Canada, and will feature Owens mic’d up so fans can hear his live on-field takes throughout each game. Owens is already a Fubo Sports Network personality as a host on the network’s original show, “Getcha Popcorn Ready With T.O. & Hatch.”

Season v2.0 fans will find more than 50 hours of programming per week via FCF Twitch channel featuring live weekly Man Up Challenge and Live Draft Show giving fans an in-depth preview of the player pool, draft tutorial and player profile segments. In its sophomore campaign the FCF expanded its inventory of dynamic weekly Twitch programming Tuesday – Sunday highlighted by; Morning Show in the Afternoon, Lanky and The Guy, Huddle and Flow, Run it Back! and The Fan Controlled Show moving to Friday at 5:30pm est.

“Embracing the future. One of the key FCF philosophies from the beginning has been to produce a lean forward real-life gaming experience fully integrated with our strategic partners for Season v2.0,” said Sohrob Farudi, Co-Founder and CEO of Fan Controlled Football. “Our goal at FCF is to serve up an out of this world interactive experience to our fans and we’re happy to be sponsored by brands that understand our vision of how fan engagement is the future of sports and gaming.”

As the official partner of FCF’s field-level, the “Wendy’s Hot Mic ” will give players the opportunity to share their thoughts and experiences with fans in real-time through a first-of-its-kind live player point-of-view camera. At any point during the game, players can run over to the “Wendy’s Hot Mic ”and drop some juicy soundbites – asking fans to call certain plays, talk trash, or simply say ‘Hi’ to viewers as if they were on the sidelines. Along with sponsoring the “Watch with Wendy’s Postgame Show,” Wendy’s will also own the “Flip the Field ”in-game power-up, and the Owners Box, where FCF’s celebrity team owners will enjoy the game.

Great Clips continues as the official sponsor of live in-game instant replays, referred to as “Great Clips.” Each week, fans will have the opportunity to vote for the best play of the week as part of the “Great Clips of the Week” campaign on FCF’s website and mobile app. Additionally, weekly game highlight video clips will be named the “Great Clips of the Game” and will be shared across FCF’s social media channels. Great Clips branding will also appear in-venue during live games and online across the league’s channels.

FCF is using Kinexon’s cutting-edge sports performance monitoring and analysis to provide unique and insightful data points directly to fans. During games, FCF players will wear Kinexon devices, that are smaller and lighter than a domino and worn in a small pocket attached to shoulder pads, to collect player data such as speed, jumps, distance run, and position on the field. Kinexon works with more than 400 teams and leagues worldwide, with the FCF becoming the first professional sports league in North America to provide this data to fans.

Hornitos will be featured at in-venue concession stands, as well as sponsoring a sweepstakes for fans to win a “Hornitos Game Day Experience” at the FCF Championship Game in June. Among the official fan voted equipment and uniform suppliers are Russell Athletic, Beastmode Football Visors, Performance 365, and Sportscale.