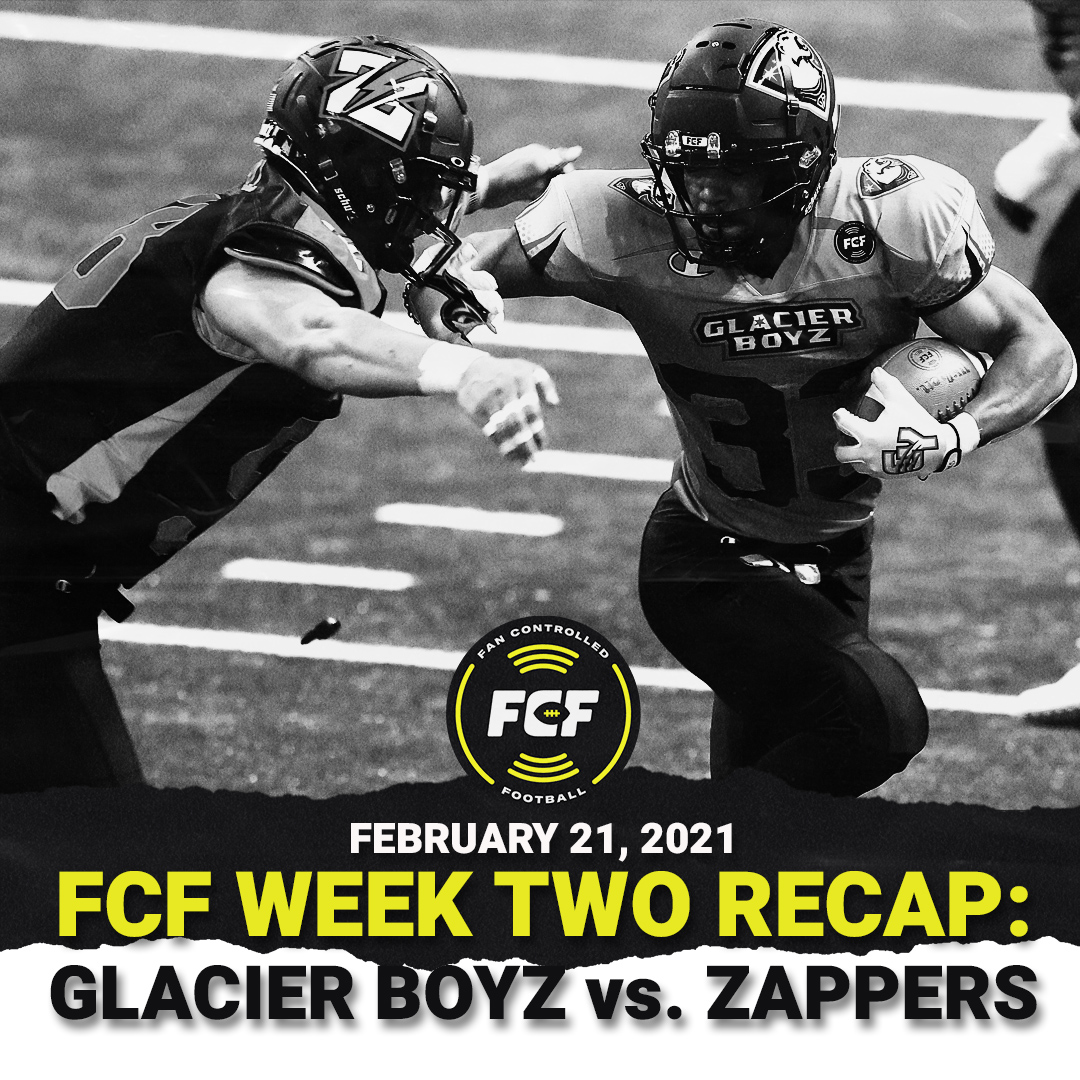 Just like Week 1, the defensive units really hit their stride in the 2nd game of the night. From the opening drive, we would see big-time plays from both the Heavy Hitters and the Shut Down Squad.

The Zappers were in the news this week, as they used their 2nd tag on SB Anthony Jones. I’m sure you know by now, but in case you don’t, Jones’ cousin is Vikings RB Dalvin Cook, and Cook has become a new co-owner of the Zappers squad.

The Glacier Boyz used their 2nd tag on WR Andrew Jamiel. A smart move, because if he had hit the free market, there’s no way he doesn’t go 1st overall.

The Zappers got the 1st possession, and the new additions through the draft, WR Alphonso Carter and James Harden made quick work of the Heavy Hitters secondary. Manziel would get sacked on the drive, before hitting Harden for a 17-yard gain, putting the Zappers in scoring position.

Manziel ran it in for the first score, and MAN UP! failed, and they take the early lead 6-0.

The game wouldn’t start out as well for the Glacier Boyz. QB David Pindell fumbled on the first snap, and the ball bounced out of the back of the endzone, resulting in a safety.

Zappers take possession again and score on a 28-yard scramble by Johnny Manziel. This time the MAN UP! play was good, extending the lead to 14-0.

This time, the Glacier Boyz fans would start the drive off with a run to SB Calen Campbell for a quick 8-yard gain. Last week’s almost hero Kavontae Turpin made a big play on a pass from Pindell, setting it up for Campbell to run it in for a score. MAN UP! was good, and GB cut into the Zappers lead.

But, 2 plays later, QB2 Logan Marchi would have the Zappers back in the endzone on a 40-yard pass to WR Travis Toivonen. MAN UP! good, the lead wa snow 22-8.

The 1st half came to a close before the Glacier Boyz could put more points up, but they got the ball 1st after the break, and got back on the board on a pass from Pindell to Jamiel, making it 22-14.

Toivonen made another big play, putting the Zappers again in scoring range before we saw another fumble. Jones put in on the turf and Glacier Boyz LB Fred Conyers scooped it up and ran back for a TD, the MAN UP! tied the game at 22.

A 3rd turnover would stop the Zappers from trying to take the lead back, and the clock would the Glacier Boyz game-winning drive.

We had our 1st ever overtime in the FCF. For those who are unaware, the fans voted to have a college-style process that would begin at the 10-yard line, both teams getting a possession.

If we still have a tie after each team had 2 chances, the game would be decided on a 1 play try, if the offense doesn’t convert, the defense gets their team the win.

The Zappers took the ball 1st in OT. Manziel would hit TE Bazile for a 6-yard gain, and SB Anthony Jones ran it in from there. MAN UP! was not successful.

The Glacier Boyz took possession, and SB Quinn Porter ran it in on a cutback, tying it at 28.

It all came down to the MAN UP! Jamiel ran his defender straight up the field, allowing for separation on the outside, and Pindell put it right on him to seal the win for the Glacier Boyz.

Manziel lead the way in rushing for the Zapper with 40 yards on 3 touches and a TD. But he would have a much better game this week through the air. 8-14 for 82 yards and a score. Marchi also had a good game passing, 2-3 for 78 yards and a TD. Both were sacked once.

Receiving leader for the Zappers was Travis Toivonen, who had 3 catches for 84 yards and a score. TE Bazile also added a TD on 2 catches for 23 yards.

Andrew Jamiel was the leading receiver for the Glacier Boyz with 41 yards on 4 catches and a TD. Kavontae Turpin added 33 yards on 2 receptions.

As we said at the beginning, this game saw a lot of defensive plays. The Heavy Hitters had 2 sacks, and 4 PBUs for the Glacier Boyz, along with a fumble recovery that resulted in the 2nd defensive TD for the unit in as many weeks.

The Shut Down Squad recorded 3 PBUs and a sack for the Zappers.

Glacier Boyz come away 1-1 and face the 2-0 Beasts next week. The Zappers fall to 0-2, despite being right there at the end of both of their losses, and face the 1-1 Wild Aces.