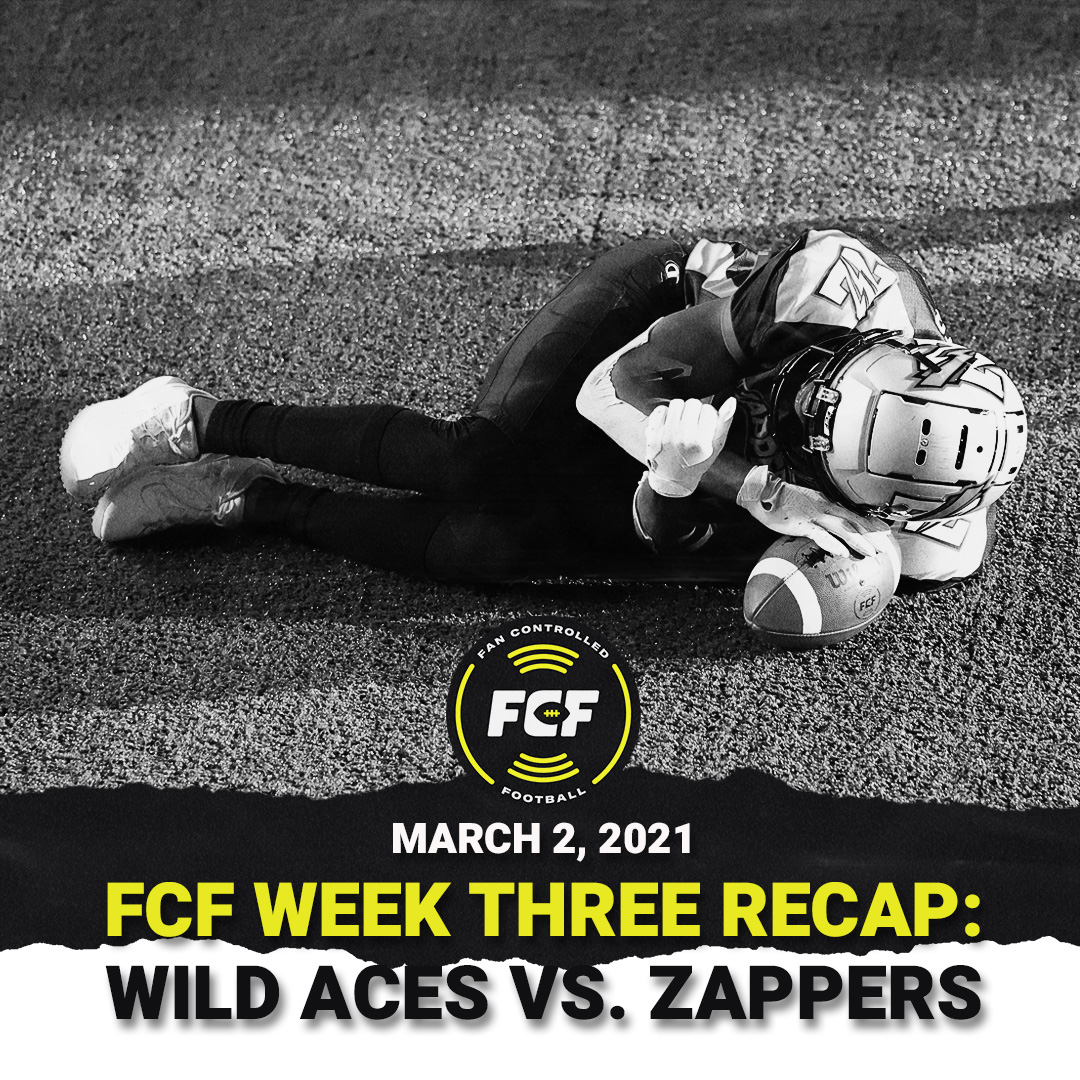 Week 3 for the FCF started off pretty dramatic with a fan outcry for review, and new Franchise Tags. The ending would be even more exciting.

We found out before the draft that Zappers QB Johnny Manziel would miss this week with an emergency oral surgery on Thursday. In addition to that, the Zappers chose WR Travis Toivonen to be their 3rd Franchise player.

The fans put their trust in the draft, bringing in QBs Logan Marchi, and Braden Smith. Obviously, they knew how well they could play, but I seriously doubt they knew how important they’d be.

The Wild Aces got their Franchise QB back from injury, Jackson Erdmann. And with WR Richaud Floyd joining Jerdy and SB LaDarius Galloway, their offensive basis was solid.

And if that wasn’t enough, we found out Saturday that former NFL WR Josh Gordon had been coaxed in to play for the Zappers. Gordon has to quarantine for a week before joining the team, and will become the Zappers’ 4th tagged player.

Marchi led the Zappers to a TD on their first drive. 3 plays, 40 yards, that ended with a 21-yd pass to TravDaddy, showing that tagging him was the only choice. The 1v1 was good, and the Zappers led 8-0 quickly.

The 1st drive for the Wild Aces wouldn’t go as well. After a short run by SB Calen Campbell, Jerdy’s 1st throw after returning to the field was intercepted by Shut Down Squad’s Marquill Osborne and returned 15 yards to set the Zappers up with great field position.

After a Marchi sack by DL James bass, it would take 3 plays for the Zappers to recover and score again. TE Christopher Bazile caught 1 for 20 yards, and Toivonen found himself once again in the endzone. The 1v1 attempt to TravDaddy was good, and the Zappers extended their lead to 16-0.

The Wild Aces would not be kept quiet long. The fans decided to implement the run game (8 rushing plays, on a 10-play drive). Galloway and Virgies got a lot of work here, but it would be QB2 Deondre Francois that would get them on the board first, with the QB draw from the 5. The 1v1 to Ralph Leonard was good, bringing the score to 16-8

Berkley Edwards was the big-play guy on the next Zappers possession, he had 3 touches for 33 yards through the run and a long gain on a pass from QB2 Braden Smith.

The drive ended on a TD pass from Smith to King for 7 yards. 1v1 didn’t convert, making the score 22-8, headed into halftime.

The Wild Aces had the ball after the break, and they made sure to take advantage of the power they had in the run game. Fans called 2 great runs to SB LaDarius Galloway. Two more runs by Jerdy and SB Daryl Virgies, set the Wild Aces up to close the gap.

Marchis and the Zappers made quick work of their next possession, as Marchi hit his SB Anthony Jones, who took it all the way to the house – like his cousin Dalvin Cook would do. The 1v1 attempt failed, and the score was 28-16

Francois showed everybody why he’s the best non-tagged QB in the FCF on the next Wild Aces possession. Block Party’s TE Elkanah Dillon made a big impact on the drive as he set them up for Francois getting the ball to WR James Harden in the endzone, cutting into the lead, making the game 28-24.

The FCF version of an onside kick was attempted but failed, by the Wild Aces, and this shows us what the downside to trying that play is, giving up good field position.

But thanks to a goal line stand, the Zappers gave the ball up, even on a 5th down powerplay. For the first time this game, the Zappers squad did not score on a possession. That would late come back to haunt them,

The Wild Aces came back, and spent most of the clock trying to get down the field and trying to take their 1st lead of the game. Jerdy would hit Leonard on a screen, and he would run it on in for the score to make it 30-28.

With almost no time left on the clock, Braden Smith and the Zappers too the field for 1 last shot at greatness, and you wouldn’t believe it if I told you.

From their own 10, Braden took the snap, bought a little time, and then launched down the right side of the field, while Travis Toivonen finished the miracle by coming down with the game-winning catch for the Zappers.

You can never say die in this league, once you think you’ve done something great, there’s someone else right behind you, showing you that you’re wrong.

Leaders for the Wild Aces were:

Leaders for the Zappers were: