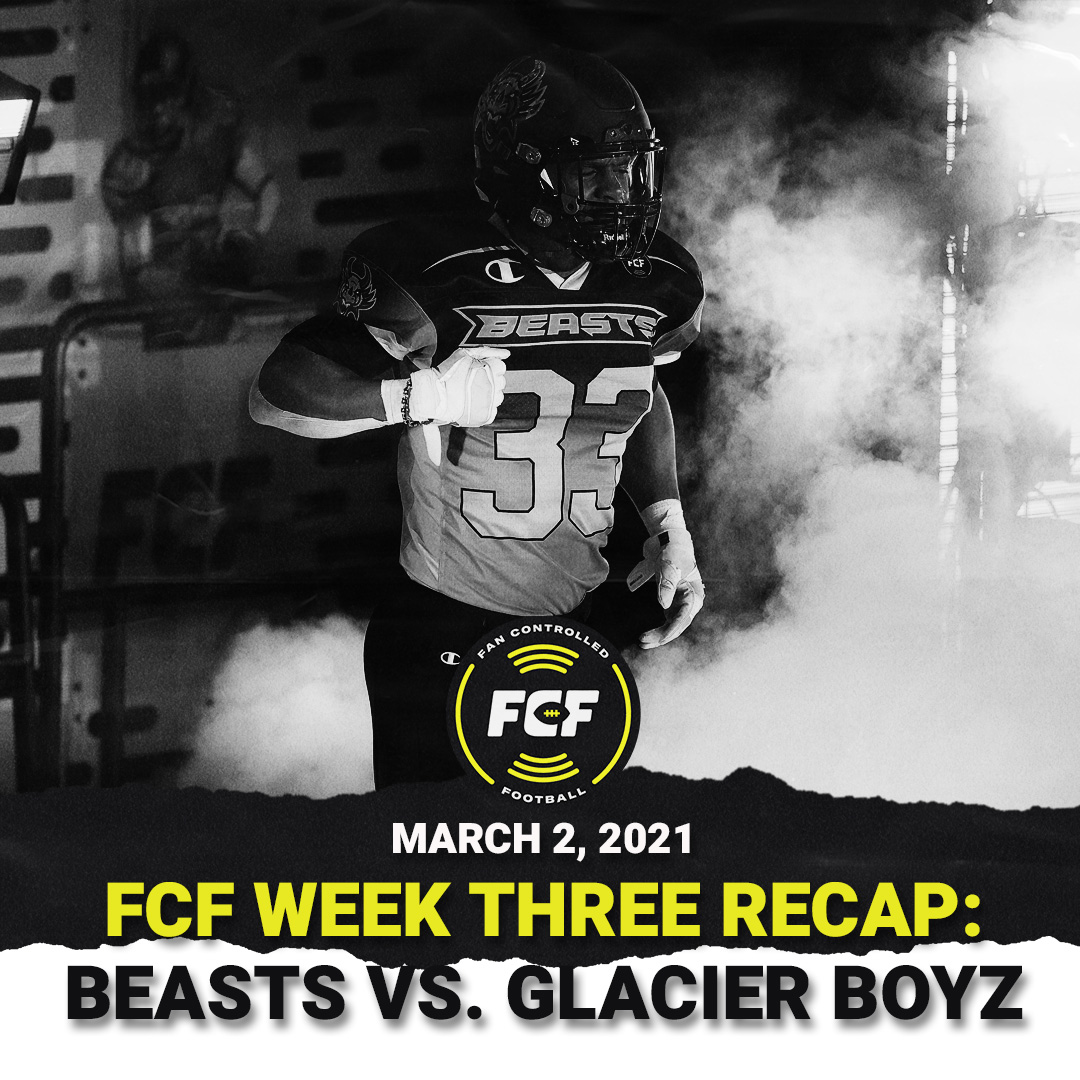 In this matchup, the Glacier Boyz would try to knock off the 2-0 Beasts, and get their 2nd win of the season.

GB gained the initial possession of the ball, but, it would end being a turnover on downs, even after using their Progressive® Fifth Down Power Up.

It was the Quinton Flowers Show on this drive and he chose to show the fans how much of a threat he is on his feet. After a 12-yard gain with the run, it was a 28-yard pass from Flowers to Franchise WR Troy Evans for the TD. The 1v1 failed, leaving the score 6-0.

Pindell used his arm to hit TE Darren Dowdell for 28 yards. Pindell would take it in himself, to get the Glacier Boyz on the board. The 1v1 with Franchised WR Andrew Jamiel was good, giving them the lead, 8-6.

Once again, Flowers showed exactly why he’s being regarded as the lock for the league MVP, this whole drive was Q running down the field, Fans called only 2 of the 7 plays on this drive as a pass, and rewarded Flowers with the TD run at the end. 1v1 with Joseph Boykin was good, giving the Beasts the lead 14-8.

Pindell returned the favor, doing his best Flowers impersonation, including the TD and the successful 1v1, giving the Glacier Boyz the 16-14 lead.

There wouldn’t be enough time on the clock to mount another Beasts challenge.

QB2 TJ Edwards got his turn, and did well to drive the ball into scoring position until an errant pass was intercepted by LB Curtis Collins, but was not returned.

QB2 Ed Crouch stepped in and the fans called a perfectly balanced series, here. SB Madre London had a few good carries, and Crouch ran the ball, ending up the endzone, extending the lead 22-14.

The Beasts start off the drive down 2 scores, the game plan should be, strike as quickly as possible, attempt the FCF onside kick, and do it again.

Flowers did take over, and even after a few missed plays, He hit WR/SB Saulsberry close to the endzone and let the athlete do the rest on a 28-yard TD play. The 1v1 was critical; complete it, and you can get to overtime. Fail to get it, and it’s a loss.

The tandem of Flowers and WR Joseph Boykin were successful, even though the QB did show some signs of a core injury. The game tied and 22, with some time left on the clock, the Beasts chose to try our version of the onside kick – a 1-time try from their own 10 to gain a1st down – and were successful.

After a controversial PI call on the defense, the team was able to lineup with 0:00 on the clock. The next call was critical. The fans chose to have SB Quinn Porter run it in for the win. Porter delivered, and the Beasts outlasted the Glacier Boyz 28-22.

Leaders for the Beasts:

WR: Saulsberry with 2 catches, 39 yards and a score.

Leaders for the Glacier Boyz:

All of the scoring plays for the Glacier Boyz were on the ground, which is promising. In arena style football, with a smaller field, we always think, “air it out”, and that’s great, but in this brand of football, fans must implement the run.

Power To The Fans