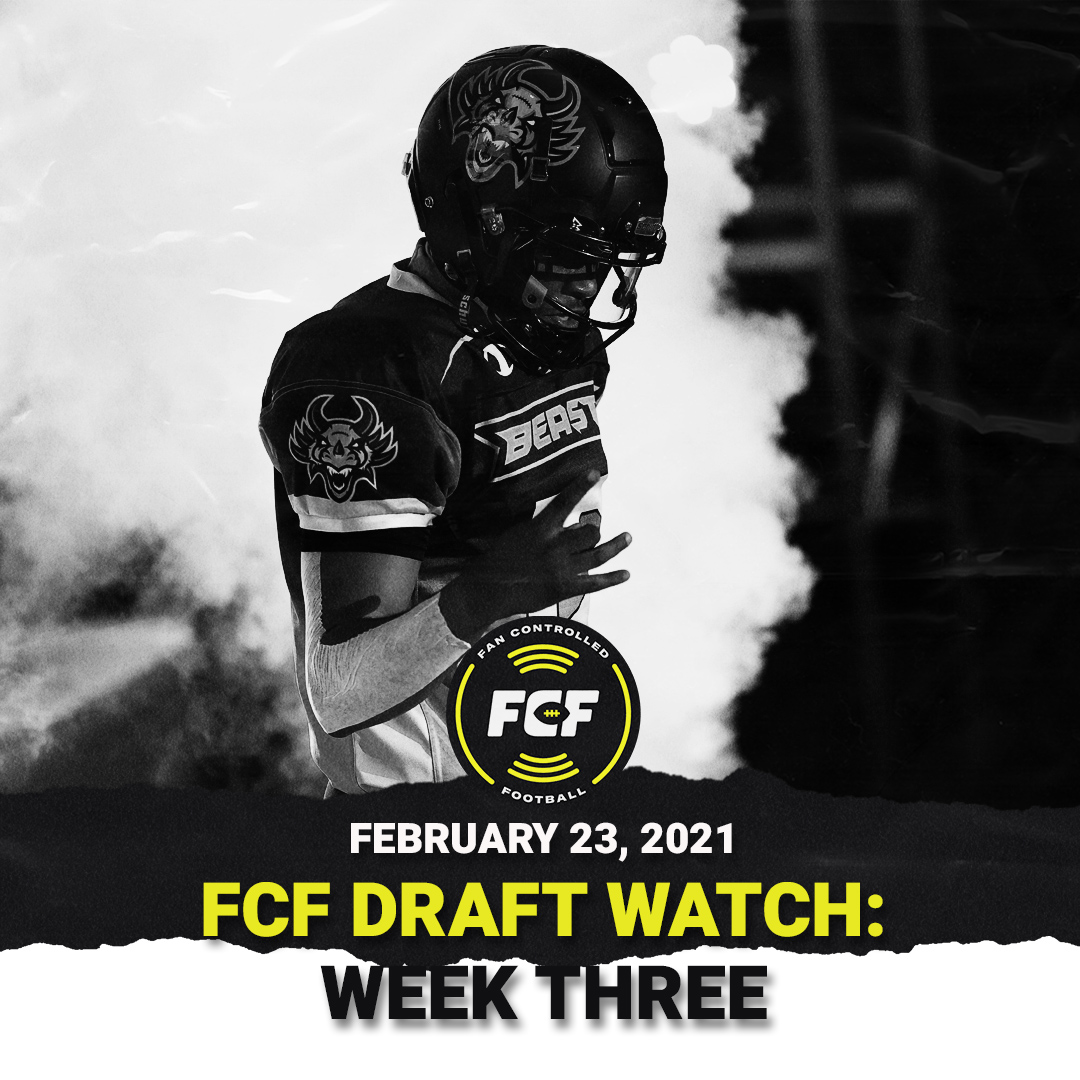 Here we are, coming up on the 3rd week of the season, which means we have our 3rd weekly draft. Last week saw some guys change teams, some fans made sure they got their guy from the previous week, and some, went undrafted.

The running game continued to be king. Sure, passing numbers went up too, but you know the old saying, “run to set up the pass.”

We will be getting a whole new round of Franchise Tags, to be announced before the draft, so some of these names may be off the board.

Teams either tagged a Super Back or drafted one high. And the QB runs also went up this week. Sure, we have a lot of dynamic QBs here who can do that, but we saw what can happen when you get your guy out there with Wild Aces QB Jerdy missing last week with a separated shoulder.

Even though they can run, let’s keep our QB sneaks and draws to a minimum, yeah? Defenses are looking for that now.

If you’re like me and rewatch the games, you get to se a lot of the things that you might miss live. I would advise not making stat sheets your #1 resource for choosing a player to draft. Sure, production is nice, but remember, we’re averaging around 20 plays a game. Not everyone is gonna be able to get a touch.

Top guys available at the SB position are:

These aren’t the only ones to watch for, but we’ll get to the others in my sleepers section.

Campbell had a reduced role on his new team this week, but he was still impactful. He scored, but he’s also a weapon in the passing game, and whenever he touches the ball he is a threat to score.

The Glacier Boyz only called 9 runs, 3 were to him and he averaged over 4 ypc, and he scored. When you have a guy that has to be respected in the passing game too, it takes away a defender, reducing their ability to double your WRs. All 3 of these guys can do that.

The Wild Aces were a team that tagged a SB, and they ran the ball 13 times with Ladarius Galloway. For all intents and purposes, they could be sitting at 2-0. While many want to make a WR their first pick because it’s a flashy position, don’t sleep on the backs.

This is another position that needs a deeper dive than the box score. Guys are averaging less than 2 catches a game – not counting MAN UPs. It’s what they do without the ball that’s also as important.

Does he block for your runner? How good is he running his routes? These are questions you should be asking. Damon Sheehy was doubled for a lot of Week 1, and the Beasts’ TE Deylon Key was the leading receiver in Week 2, with Sheehy on the roster.

Thinking he isn’t a valuable part of their victory would be a mistake.

There may be a list of guys available, but they won’t last long. Backs are important, but each of these guys can open up the game in a hurry. Fans, you gotta call the right plays too. Having a guy like Turpin and Saulsberry on your team doesn’t help if you don’t find ways to get them the ball.

Here, I don’t think you can go wrong with any of the guys available. Each of them can beat the defense in multiple ways, but using them properly is key. Braden Smith is a big example of that. He has a great arm, but he can also win with his feet. I know, I said to cut down the QB runs, but it’ll help make him more efficient if they’re worried about him taking off.

Deondre Francois showed again why he is a vital piece of the puzzle. 2-2, 40, and 2 TDs. Also averaged 7 ypc. Many would agree he should’ve gotten the W this week stepping in for Jerdy. And don’t get me started on TJ Edwards. He has to be high on your list.

The TE position was a big one again this week, with guys like Deylon Key, and Christopher Bazile making big plays for their teams, so while you may think you can just let one fall to you, that’d be a mistake.

The TEs on each unit are:

Here are how they stack up so far:

As for the defensive units, here is the breakdown of how they have produced:

Both of these units are key to whether or not your team is competitive. Both have dynamic playmakers and can turn the game on a dime. Fans may not call defensive plays, but the unit you decide can make all the difference.

I’d caution against paying too much attention to their record. The Zappers were in both of their games until the end, and we can see that turnovers don’t always result in wins. But they help.

Like with every draft, there are guys that may not show up in the box score or may end up being undrafted, but these aren’t guys fans should ignore. James Harden was a key player in the Zappers game last week, even in a loss. But that shouldn’t keep you from wanting the playmaker as part of your team.

Joshua Johnson is another name to be aware of. We may not have been able to see a lot of him, but per Jason Chilton, he’s a guy the coaches love. Hoping to get him in the MAN UP! on Wednesday so fans can see what they see.

Here are some other names to consider while creating your draft board for Week 3:

Use this to help you when it’s your team’s turn to select a player. Don’t go with trends, pick the best available at the position that your team needs the most. Week 1 we saw every team except for the Beasts Franchise Tag a QB. They’re 2-0, even though they lost their top SB from Week 1.

All 4 games have been decided on the last drive, with QB2s playing at least one possession in 2nd halves. Getting the right guy there is critical, regardless of who your Franchise QB is.

Check the official FCF Discord for your team’s fan draft chats. Your fellows are in there formulating a plan as we speak. Get involved, and make your voice heard!