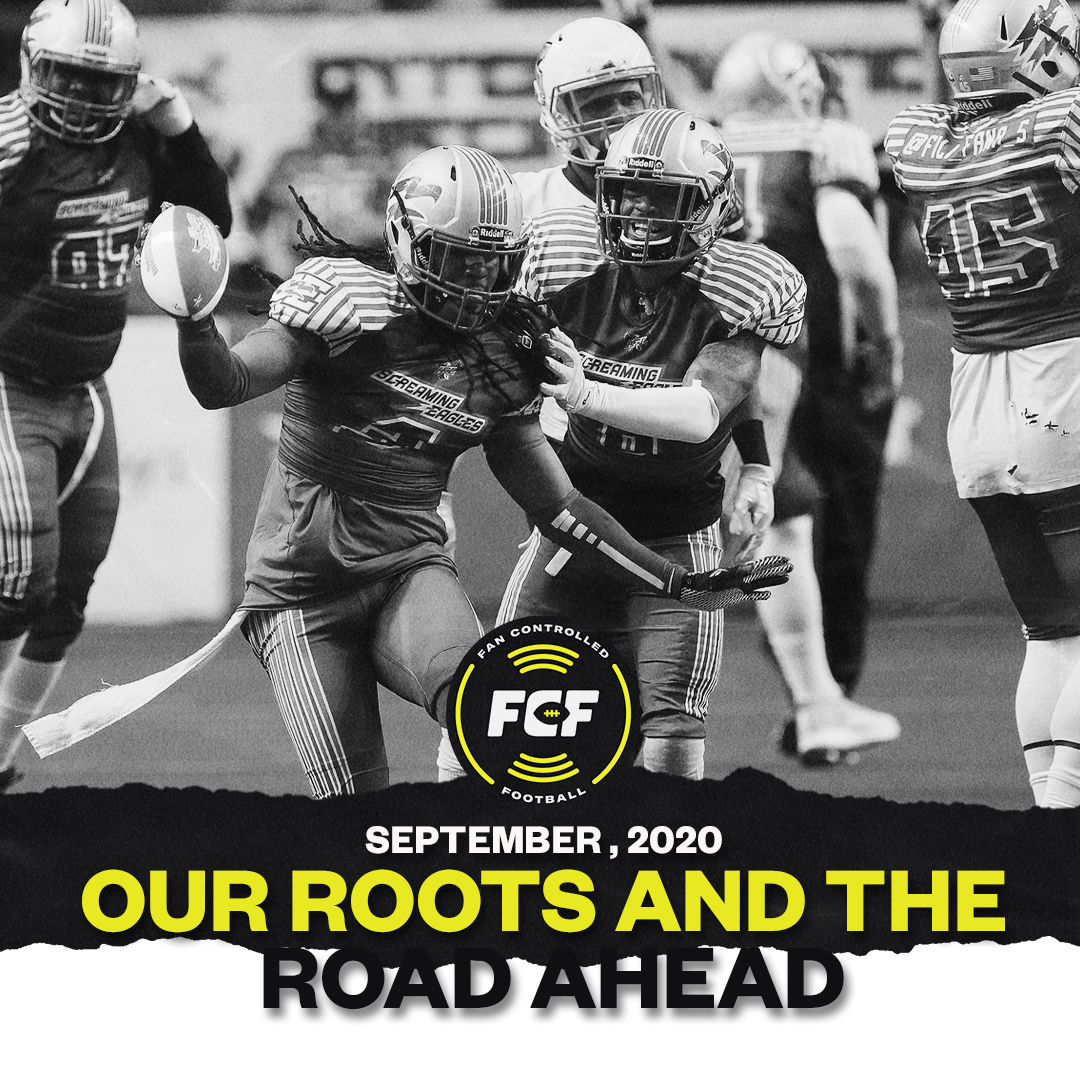 It’s been almost 5 years since we started this business, a time that both feels like forever and just yesterday simultaneously.

We began with a singular mission – to use technology to give power to the fans. Through a wild ride and lots of ups and downs, we have reached a point where the reality of an entire football league run by the fans is just on the horizon. So for those of you who are new to the FCF party – or those who just like to reminisce – we wanted to give you a quick 101 on how we got here and where we’re headed.

In 2016 we acquired the rights to an expansion arena football team in the IFL and we opened up the first fan vote to help decide where we should play. Fans chose Salt Lake City and then helped us raise money to build an app for them to run the team by selling out our IndieGoGo campaign in 10 days.

From there the fans named our squad the Screaming Eagles, designed the logo and jerseys, chose the cheerleaders, interviewed coaching candidates and picked the head coach, recruited players and set the roster, and even decided what beer we served in the concession stands.

On Feb 16, 2017 nearly 10k fans packed into the Maverick Center and another 100k streamed the game online– marking the first time that fans actually got to call the plays for a pro football team in real-time. After two of arguably the worst offensive possessions in the history of sports, we found ourselves down 14-0 and starting to think that perhaps this was all a terrible idea. We’d be lying if we didn’t say we considered high tailing it out of the building and never looking back, but man are we glad we stayed. Soon after, fans called the play that scored our first TD and rushed the field and we knew this was really just the beginning of something pretty cool.

Over the rest of the season the fans led the #3 offense in the league, helped our QB earn Rookie of the Year honors and generated nearly 50x the game streams of the rest of the league. While we saw this as a great proof of concept, we quickly recognized that this idea didn’t really fit in a traditional league and we identified myriad ways we could innovate on both the game and the business model if we could build it from the ground up. So, when the season was done, we bid a fond farewell to the IFL and set out on a path to launch a league where the fans called all the shots.

Over the last three years we have plotted and planned, building a distribution partnership with our friends at Twitchand bringing on a killer roster of famous footballers and football fans to help us build the league – including Mike Tyson, Joe Montana, Richard Sherman, Marshawn Lynch, Greg Miller and his Kinda Funny crew and, most recently Quavo. (As a side note, it’s pretty wild when you meet someone at a dinner party or on an airplane and when they ask what you do you reply “I run a new football league with Mike Tyson”).

After countless close calls with raising the full funding needed to get Fan Controlled Football off the ground, the world got hit with the Coronavirus and it looked like there was no chance that anyone was going to invest in a startup football league.

But then an odd thing happened. The very innovations we had long planned – no fans in the stands, less players and coaches all in one bubble location, no travel, focus on the digital fan and streaming audience, etc – became the new normal. And we quickly became real thought-leaders in the space.

All the big leagues moved quickly to replicate our planned model. And after unsuccessfully attempting to raise money over some of the greatest years of venture capital investment, we somehow found ourselves in the midst of a global pandemic and economic crisis finally in a position to close our Seed round with a group of amazing investors led by Lightspeed Ventures and including Verizon, Correlation and Basecamp (along with some exceptional tech entrepreneurs like the founders of Reddit and Bleacher Report).

So now here we are – we’ve got partners, a plan and the money to roll out FCF Season v1.0. Almost all of our amazing core team stuck around through thick and thin the last few years and now we are quickly staffing up as we prep for launch of our first season.

We need to bring in great people and we need to do it quickly – as we have a lot to do over the next 6 months, including (roughly in order of how it will all happen):

While that should pretty much sum it all up, there are a handful of questions we get a lot – so we’re going to assume you are thinking about those right now and go ahead and answer them here (aka this is the FAQs):

Do all votes count the same? Hell no. Not all fans are created equal and those that are the most die hard deserve to be rewarded. In the FCF the better calls you make the more power you will earn and the greater access you will unlock. This means that there may be some decisions that only the very top fans of a team get to make or there could be some decisions that are open to everyone, but the calls made by the folks at the top are weighted much heavier than those at the bottom. The better the results of your calls the more FanIQ you earn which helps you work your way up. This power and access is tied both to the lifetime input of the fan and their performance each week, so even rookies can shine if they’ve got the knowledge.

How do you keep the trolls out? First off, every decision the fans make is tied to a set of options that a real coach or GM would decide between. This means you can’t put your grandma in as QB and you can’t take a knee when you’re losing in the 4th quarter – because those aren’t real options that a GM/Coach would consider. This means that there is really never a clearly terrible option, just ones that aren’t as good. Additionally, because the top fans of each team carry the greatest power, it ensures that the fans who just want to come in to try to troll would have to spend a bunch of time earning their way up to have said power – and we believe that by the time they get there they will be so stoked on their team that they won’t want to do anything to bring it down.

Who are the players? There are 257 FBS/FCA (aka D1/D2) football teams each with 70+ man rosters, meaning thousands of guys who we all watch on TV on Saturdays leave school each year and only a few hundred actually make the NFL. So there are close to 10k guys who have played elite college football in the last few years out there that we will be going after. We’ll use a mix of recruiting sources, coaching connects and our fans to help us bring in an awesome group of guys who can ball out and who are entertainers off the field that our fans will want to root for.

How do I get involved? Pick a team and get in the action – starting off fans are submitting team name ideas, then they will pick the actual name, logo and jerseys. And be sure to spread the gospel to your friends, family and anyone who will listen. Football is a team sport, so make sure you bring your team along.

How much does it cost? The FCF is totally free, but of course we strongly encourage you to support your favorite squad by buying a sweet t-shirt, hat or whatever gear strikes your fancy. When we get closer to taking the field, there will also be options for the die hard fans to sign up for a premium subscription and in-game purchases that will help you get exclusive access directly to the live coaches and players, as well as ensure you have maximum ability to dominate the game.

When does this start? Our first games will be played in mid-Feb 2021, but this thing has already started as there is a lot to do between now and then. First we have to establish our team brands, then the key rules for the league, and finally recruit and select the players before we take the field.

Can I try out for the league? If you are a legit baller with experience at the college or pro level, then yes definitely sign up here. If you are some dude who played high school football 23 years ago and want to relive your glory years, well that ship has probably sailed and for your own health we strongly advise sitting this one out.

Are you hiring? Yes! We are growing across the team so check out our openpositions and if there is one that is good for you please throw your hat in the ring.

Is there gambling? If football is being played, you can expect someone to be making lines on it – but for Season v1.0 that won’t be us. While we are sure there will be options to bet on FCF games when the season starts, it doesn’t seem kosher for us as the owners of the teams to be the ones running the gambling so we’ll leave that up to the experts (for now).

For Season v1.0 our aim is on spreading the FCF gospel to bring on as many fans as possible,  with a particular focus on proving that when you give fans control they are even more engaged and come back even more often. If we can show that fans really want this and that the experience we create is awesome, then the sky’s the limit. We will grow the league to include more seasons, more teams and more cool stuff. Then we will expand into other sports like baseball, basketball, cricket, and who knows what else.

What we really need is your help. Join a team, submit a name, vote on a rule, draft players, and call plays. And tell your friends and then come back and do it again the next week. It’s going to be pretty awesome and although it feels like a long path to get here, we’re beyond excited to finally be at the starting line!