Quavo Is Introducing ‘Fan Controlled Football’ To The Culture 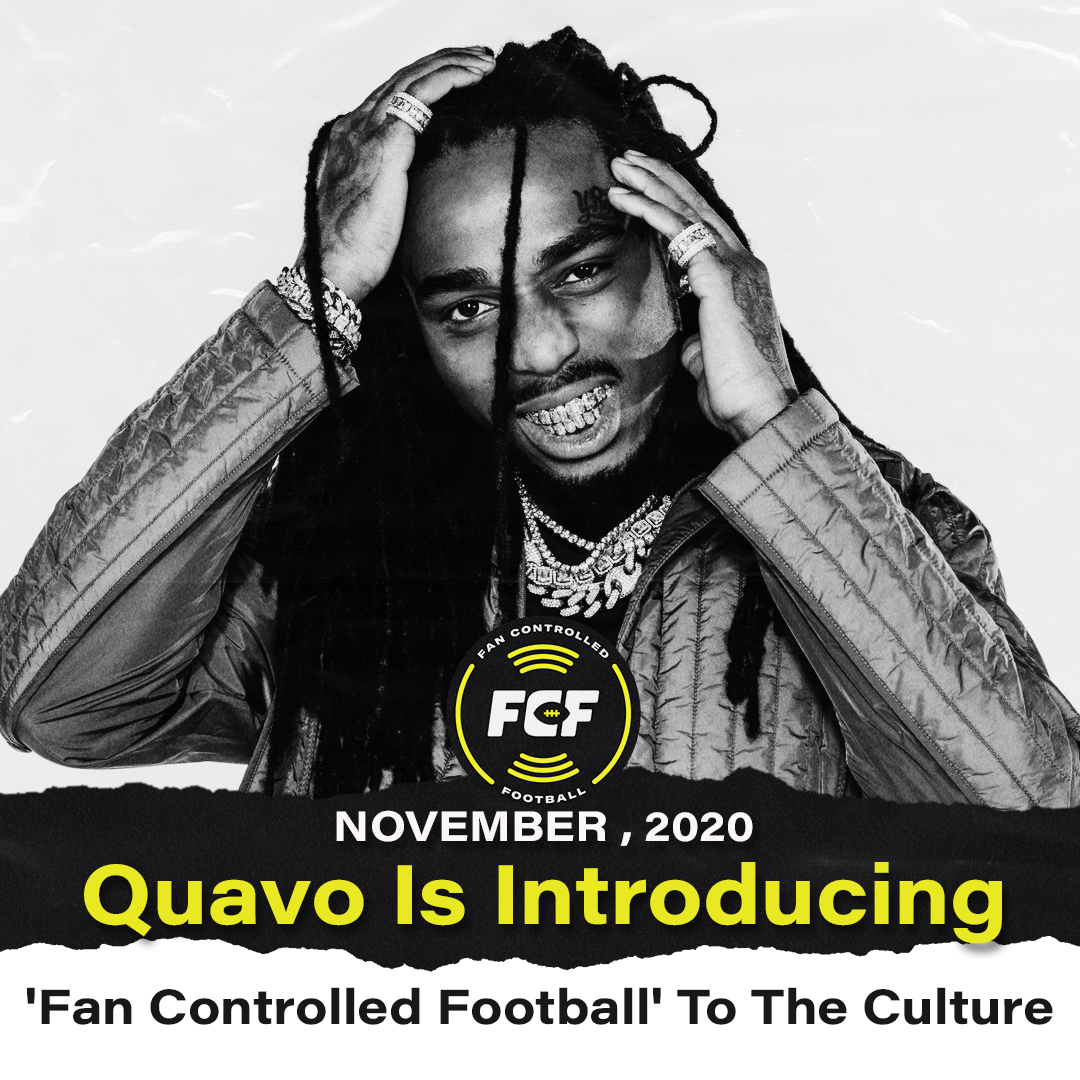 From their penchant for popping tags and name-dropping designer brands in their rhymes to the obsession with diamond-encrusted neckwear, the Migos are the modern-day poster-children for decadence and opulence. But when it comes to balling, group member Quavo is a seasoned veteran, literally and figuratively. Notorious for his appearances in NBA all-star celebrity games, where he routinely dominates the competition, Huncho has built a rep as one of the athletically gifted hit-makers in music today.

Although he’s known for his skills on the hardwood, football is definitely among his passions. His newest endeavor, an ownership stake in Fan Controlled Football (FCF), the first professional sports league to put the viewer in the coach’s seat and the general manager’s office, in live time, finds him putting his focus back on the gridiron. Having inked an exclusive, multi-year streaming broadcast partnership with Twitch, the FCF will be the first professional sports league to be fully integrated with the streaming platform with the potential to explode in the digital age, where user interest and participation is the main recipe for success.

Having tossed the pigskin around as a Georgia high school football star, to Quavo, it was a no-brainer to get involved with the innovative league on the ground level. “We are building a brand and something different in our league – with the fans. They are in control and get to pick the team names, colors, logos, and more,” said Quavo said in a press release. “I’m really excited because FCF is fast-paced, high-scoring 7v7 football and you are in control. You go from sitting on the couch watching TV and pressing buttons on the remote to actually pressing the buttons on the plays.”

Played on “a 35-yard x 50-yard field with 10-yard end zones,” the Fan Controlled Football league will kick off in February 2021, with a four-week regular season, one week of playoffs, and a Championship week. The league will consist of former elite D-1 athletes, the CFL, XFL, and the Indoor Football League. Broadcasted live from the FCF’s state-of-the-art facility in Atlanta, each game will be 60 minutes in length and will allow the viewers to play a hand in the final outcome on Twitch.

Aside from sports, Quavo has been relatively lowkey on the musical tip as of late, with two years having passed since a solo release or a Migos album. However, according to him, this delay can be considered the calm before the storm, as he assures him and his brethren are primed for one of their biggest years yet. VIBE hopped on the line with Quavo to talk Fan Controlled Football, what he’s got cooking in the studio, and his foray into TV and film.

It’s just showing my interest in the game of football and just trying to put a twist to where it’s fan-controlled, fan-involved. A lot of times we watch the game, you watch the game, you just have some concerns. Sometimes you feel you can make the plays or call the play, [with FCF], you can sit on the couch and make the play. I just think we came together to make something crazy like that. I feel like it’s something hard, it’s something new, it’s something fresh. It’s a new beginning to something, like giving ni**as a chance. Giving D-1 players who couldn’t make it to the league a chance, giving ex-NFL ni**as a chance if they still got it, [and] to go with the fans. When we saw the Falcons lose the Superbowl LI, we [fans] just knew what plays to call, we knew to run the ball. We were up 28-3. All we had to do was hold the ball, but we wanted to air it out and we made a mistake and lost to Tom Brady. Just like when Marshawn could’ve won a Superbowl. If they’d have given him the ball on the two-yard line. We knew that Marshawn Lynch was supposed to get the ball, [but] they wanted Russell Wilson to win it and the New England Patriots caught an interception. So that’s how we’re trying to shape it, we’re trying to make something new.

The FCF will be live-streamed exclusively on Twitch, which has become one of the leading platforms for eSports live-streaming and will kick off in February 2021. Do you feel the FCF has the opportunity to fill that NFL void during the spring, particularly given the fan engagement that FCF enables?

Speaking of fan engagement, the FCF is the only professional sports league that enables fans to call the plays in real-time and puts the viewer in control of a game’s outcome like never before. Have you ever had that experience, as far as fantasy football?

Nah, but I’m into Madden. You can sit at home and pick your plays [with FCF], it’s just like the lifestyle of Madden. It’s like a reality of Madden. You’re playing with people at home, with these unique athletes, and it’s seven-on-seven.

As an Atlanta native, how significant was the FCF’s state-of-the-art facility being in your hometown in your decision to come on board as an owner?

It’s very important. We got top-tier talent here, so it’s opening up opportunities for a lot of guys. We’re just glad it’s in the south, it’s like a hub. Everybody loves Atlanta and everybody wanna be here. Everybody wanna play and the weather is good.

NFL Super Bowl Champions Richard Sherman and Marshawn Lynch, boxing legend Mike Tyson, and YouTuber and podcaster empire Greg Miller are among the FCF’s team owners. How does it feel to be competing against some of the most accomplished athletes and entertainers in the world? Have you had the opportunity to meet with any of them?

Being that you’ll all be working with your respective fan bases in shaping your team’s personality and identity, any thoughts about what the team’s name will be?

Man, I wish I did, but it’s so straight strictly fans that you never know. Just like with music, can have an idea that is a smash, and then the fans don’t think it is. You gotta strictly listen to the fans on this one. You gotta listen strictly to how they want it because it’s the point of the game, that’s the point of the league. We gotta let them control this game and then we the players and we the people that’s listening to the people, the culture. FCF stands for culture, too, you feel what I’m saying? We listen to the culture, we’re letting the culture run the field.

How involved will you be in the drafting and scouting process for your squad?

The fans make the draft, fans get to see everything. Open books, everything. It’s an open thing, it ain’t nothing to hide over here. The fans control it all.

In addition to sports, you’ve also been delving into acting, with cameos in shows like Atlanta, Star, Black-ish, and Ballers. Earlier this year, you appeared as yourself in Narcos: Mexico. How did that opportunity come about?

Narcos reached out. We [Migos] had this song called “Narcos” on the [Culture II] album and we went and shot [the video] in Miami and everybody thought it was a Narcos movie scene and it ended up being Madonna’s house. So we just shot that there and then they reached out to us. I think Offset had a performance somewhere and Takeoff had to do something and I just ended up being free that day and I went and shot it in New Mexico. I had fun, I loved it.

Do you have plans to pursue any supporting or leading roles in film or television?

Hell yeah, most definitely. I’ve been sitting down and having real great meetings with directors and people that got some movies in the works for 2021. I feel like I’ve got some good spots. I don’t wanna tell it cause they’re gonna make some announcements. It’s coming soon.

It’s been two years since you’ve released a solo project or one with the Migos. Can fans expect any new music from you anytime soon and what are your next plans on that front?

Most definitely, hell yeah, we’re shooting videos right now. We’re vaulting up a whole lot of videos so we can give you music and visuals at the same time. “Need It,” the song came first and then the video. Right now, we wanna get a lot of videos and a lot records in the vault and smash [them] all at once ’cause it’s been two years.

Pop Smoke’s passing was one of the more tragic events in rap in recent memory, but his debut album, which you appeared on throughout, has been one of the most successful and acclaimed projects of 2020. How has it been seeing how the album’s been received, especially after you and him developed such a bond in a short time?

I’m happy. I’m proud of him, that was my partner. We did a lot of records, we spent a lot of time together and I feel like the album would’ve did even more with him being alive. A lot of people’s album just go crazy when they die, I feel like his sh*t would’ve still went crazy. He had the momentum, he had the buzz. He was having fun. He was hot, he was fresh, he had everything ready.

This interview has been edited for length and clarity.