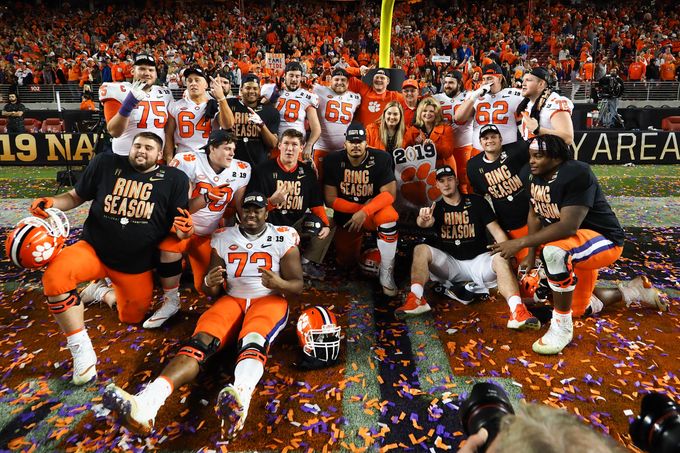 Well, that’s certainly not the College Football Championship game we were all expecting, was it? Last night, Clemson steam-ROLLed all over Alabama (see what we did there?) thanks to Trevor “Five Star Recruit” Lawrence, a true freshman, and an amazing right-handed catch from Justyn Ross – another freshman. The Crimson Tide (14-1) thought they were about to secure their sixth national championship in under 10 years with Coach Nick Saban, but boy, were they wrong. After leading his team to a 44-16 win and finishing with 347 yards, three touchdowns, and zero turnovers, Lawrence was named most outstanding offensive player. Shocker, we know. Believe it or not – especially after last night’s performance – but Trevor Lawrence still has another two years before he can enter the NFL draft. We understand that talent like this only comes around once in a generation, but let’s say you’re looking at Lawrence, or at least someone like him. Do you want him to declare his intentions with a football league as soon as he’s eligible? Or do you want him to play as much as he can in college before signing up for an FCFL combine (maybe even exhaust his eligibility a la Peyton Manning?)? And do you think the FCFL should be open to “one and done” athlete eligibility – a la NCAA hoops – so that the fans could have a shot at drafting Lawrence this spring? We think while our fans are eager to have the best players possible on their team, they have also seen what happens when an athlete goes pro too soon. Sometimes they’re amazing, but a lot of the time they go later than they would have liked and are sour over it or they don’t get picked up by a team until after the draft. That being said, we think the fans would prefer their favorite college athletes to get everything they can out of their college playing experience before putting their fate in the hands of the fans.